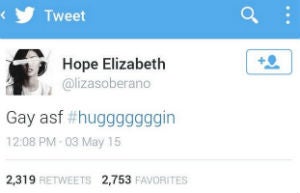 Sharing her reaction on the bout, Soberano tweeted: “Gay asf hugggggggin,” referring to Mayweather’s move during the fight.

While Gutierrez tweeted: “Mayweather clearly has a vagina”and “Calm your tittays! I love people with vaginas as much as you do! I’m just saying Mayweather has one.”

Users slammed the tweets from Gutierrez and Soberano for their allegedly sexist remarks.

Twitter user @_paulinealvarez said: “lol liza soberano deleted her tweet about how mayweather “hits like a girl” well now at least we informed ppl that sexist jokes r not okay.” 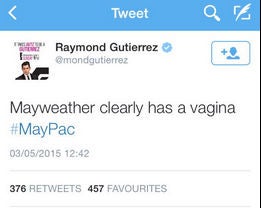 User @mellajulia said: “idc if you’re famous. think before you tweet. using the word gay to insult someone is not ok.”

Soberano subsequently apologized for her tweets.

“Well I’m sorry if I offended you in anyway but I didn’t mean for it to sound like that I apologize,” Soberano said after deleting the allegedly offensive remarks.

Various local and Hollywood celebrities also opined their sentiments on the historic fight.

READ: Hollywood, local celebs react to ‘Fight of the Century’

Pacquiao: I thought I won the fight