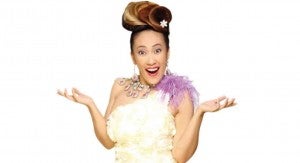 The stream-of-consciousness, grammar-challenged, punctuation-deprived missives exposed GP as shallow, self-centered, and vacuous. Thing is, drumbeaters have packaged GP as smart and articulate.

GP frequently murders both English and Filipino languages in public and in private. GP’s political opinions are laughable at best.

Is it because SC’s career has hit a rough patch? SC’s personal life is not faring well, either.

SC cannot just relax and depend on Vapid Partner, whose ship is sinking just as fast.

Pals should tell SC that public service requires charisma and genuine concern for the plight of the common man—concepts that SC seems ignorant about.

No wonder Perky Starlet looks miserable. Beloved Kin forced her to hook up with Rich Benefactor. PS had no choice because the clan’s survival depended on it.

BK arranged PS’ “meetings” with RB. Unfortunately, RB’s Feisty Spouse got wind of the indiscretion and tried (in vain) to end it.

Now, FS is waging a shame campaign against PS, with the help of BK’s Fearless Frenemy.

It helped that Scandalous Beauty was pleasantly plump.

For nine months, SB was able to hide a baby bump—the result of a dangerous liaison with Influential Figure.

After giving birth, SB went about her business as if nothing happened.

What ever happened to the fruit of that illicit affair? Poor kid is being introduced as some distant relation.

Seasoned Starlet is not giving up on her failed romance with Handsome Personality.

Unfortunately, HP is not interested in reuniting with SS.

Melodramatic SS often turns to Lovely Relative to cry her heart out. 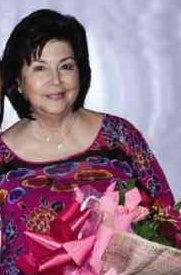 BOOTS Anson-Rodrigo says, “Every woman should strive to be healthier in all aspects of her life.”

SS hopes against hope that HP would change his mind upon returning from a trip.

Actually, HP was turned off big time when SS revealed her true vindictive colors when they broke up.

Boots Anson-Rodrigo, is the new endorser of naFlora feminine wash.

“I commend ADP Pharma for paying attention to the senior citizens sector, to which I now belong, with this product that is formulated for menopausal women,” said Boots, 70.

The new Mrs. King Rodrigo, a local movies icon and an active participant in civic causes, pointed out: “Every woman should strive to be healthier in all aspects of her life, to fulfill her responsibilities no matter her age.”

LOS ANGELES—“Avengers” superhero actors Jeremy Renner and Chris Evans have apologized for calling costar Scarlett Johansson’s character in the blockbuster movie a “slut,” saying it was a tasteless joke. 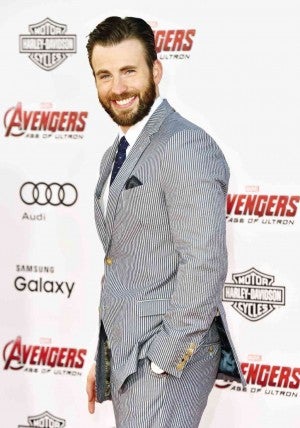 CHRIS Evans’ “tasteless” joke on an “Avengers” character was widely criticized on the Net. AP

Renner, who reprises his role as Hawkeye in the sequel “Avengers: Age of Ultron,” made the offending comments in a TV interview alongside fellow superhero star Evans, who plays Captain America.

An interviewer asked them what they thought about Johansson’s character, Black Widow, opting not to get together romantically with either of them.

“She’s a slut!” Renner told the Digital Spy interviewer, triggering huge guffaws from Evans, who added: “I was going to say something along that line … a complete whore.”

Social media, perhaps inevitably, went ballistic, and on Thursday Renner’s publicist issued an apology on his behalf, saying the actor was simply exhausted from the slog of promoting the new movie.

“I am sorry that this tasteless joke about a fictional character offended anyone. It was not meant to be serious in any way. Just poking fun during an exhausting and tedious press tour,” he said.

“Avengers: Age of Ultron” comes out in the United States Friday (Saturday, Manila time), after its release around much of the rest of the planet last week. AFP 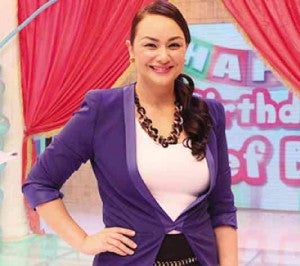 DONITA Rose pleads for privacy to protect her child from rumors of marital discord.

Donita Rose on rumors that she and husband Eric Villarama have separated: “A lot of people have been asking me because recently, things have not been OK. Medyo fresh pa lahat. So I would like to ask sana people not to preempt what’s happening between us.” (This is one of those let-us-really-leave-them-alone situations.)

Donita, asked if she thinks there’s a third party involved: “I don’t know. Let me find out and figure this out.” (And that’s truly none of anyone’s business.)

Donita asks for privacy: “I feel bad because people know how transparent I am … but I have a son and he doesn’t know what’s going on right now; I just need to protect him.” (Do what you gotta do, girl. We’ll be OK.)

Ai-Ai de las Alas, asked who between her and friend Eugene Domingo had a relationship with another woman: “Ano ba ’yan! It’s beyond my principles—nagbagong buhay na ako!” (Like there’s anything wrong with that. Ano ba? 2015 na!)