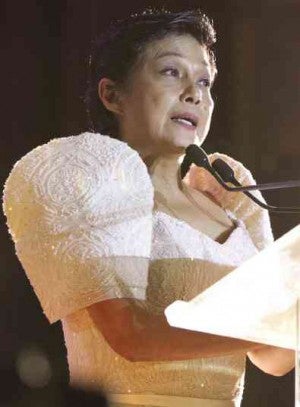 In her acceptance speech for the Gawad Lasallian, from the De La Salle University (Manila) Filipino Department on April 27, Nora Aunor admitted she was nervous returning to the country (in 2011) after eight years in the United States—“afraid people would not welcome me back, that no producer would hire me.”

Fast forward to 2015: She has three films in the works: Kristian Cordero’s Bicolano-language drama “Hinulid” and two untitled movies under Adolfo Alix Jr.—on OFWs in the Netherlands and the Tasadays. For the latter, about the discovery of an indigenous tribe, she was willing to go topless. “I did it in ‘Banaue’ (1975),” she said. She has three films in the can: Alix’s “Padre de Familia” and “Whistleblower” and Brillante Ma. Mendoza’s “Taklub,” a Cannes entry this year. Bayani San Diego Jr.