MANILA, Philippines–Young boys dancing in heels may be the last thing one can imagine seeing in a talent show.

But the whole Marina Bay Sands was taken by storm when the dancers of the Filipino hip-hop group Junior New System on Thursday wearing shiny high heels rocked the stage during Asia’s Got Talent semifinals, earning the Golden Buzzer from the judges.

The group, clad in denim shorts and stylish red long-sleeved shirts, flaunted their swaggering steps and acrobatic moves while dancing along upbeat mash-up music including “We Will Rock You”, “Maria” and “Let’s Get Loud.”

The screams and shouts even grew louder when the boys started to shake their hips to Beyonce’s “Crazy in Love,” and one member flipped in the air, prompting the amazed judges and crowd to give a standing ovation at the end.

The Golden Buzzer vaulted the group to the grand finals.

“I love it! I am touched by your story, and what you have achieved so far is very inspirational,” said judge Anggun.

Another judge, Vanness Wu, looked totally stunned and said the boys didn’t even need the heels.

“You guys are amazing as is. I know it brings the difficulty level but I love watching you guys get into it…You guys are awesome. I loved it. You guys are my favorite, seriously,” he said.

Junior New System will be joining Gwyneth Dorado, another Filipina, in the grand finals.

Earlier classical singer Gerphil Flores also wowed the judges and the audience with her captivating rendition of the ’70s hit “Where Do I Begin?” 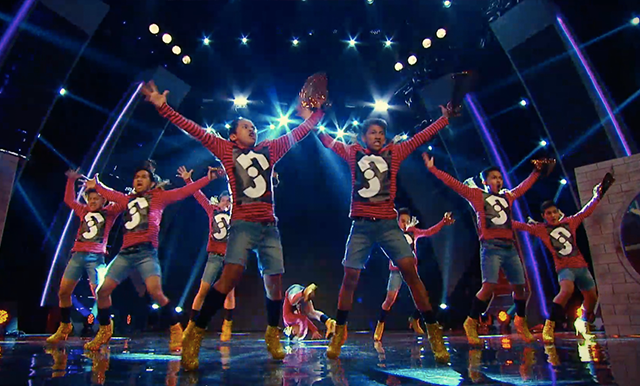 Screengrab from Asia’s Got Talent Video.

Viewers can vote for their favorite acts in one of three ways: SMS, Facebook and the “Asia’s Got Talent” mobile app.
In the Philippines, text SMS AGT(Contestant number) to 2929. This service only supports Smart and Globe
and charges will be applied to customer’s mobile.
Voting opens after the broadcast of each semi-final episode and will remain open for four days. Further details on how to vote can be found on the website:  http://asiasgottalent.tv/vote/
AGT third semifinals performance night and AGT second semifinals results night will be on April 30, Thursday, 8:05 p.m.
Grand Finals is on May 7 and the results will be announced on May 14.
For finale schedule, visit axn-asia.com