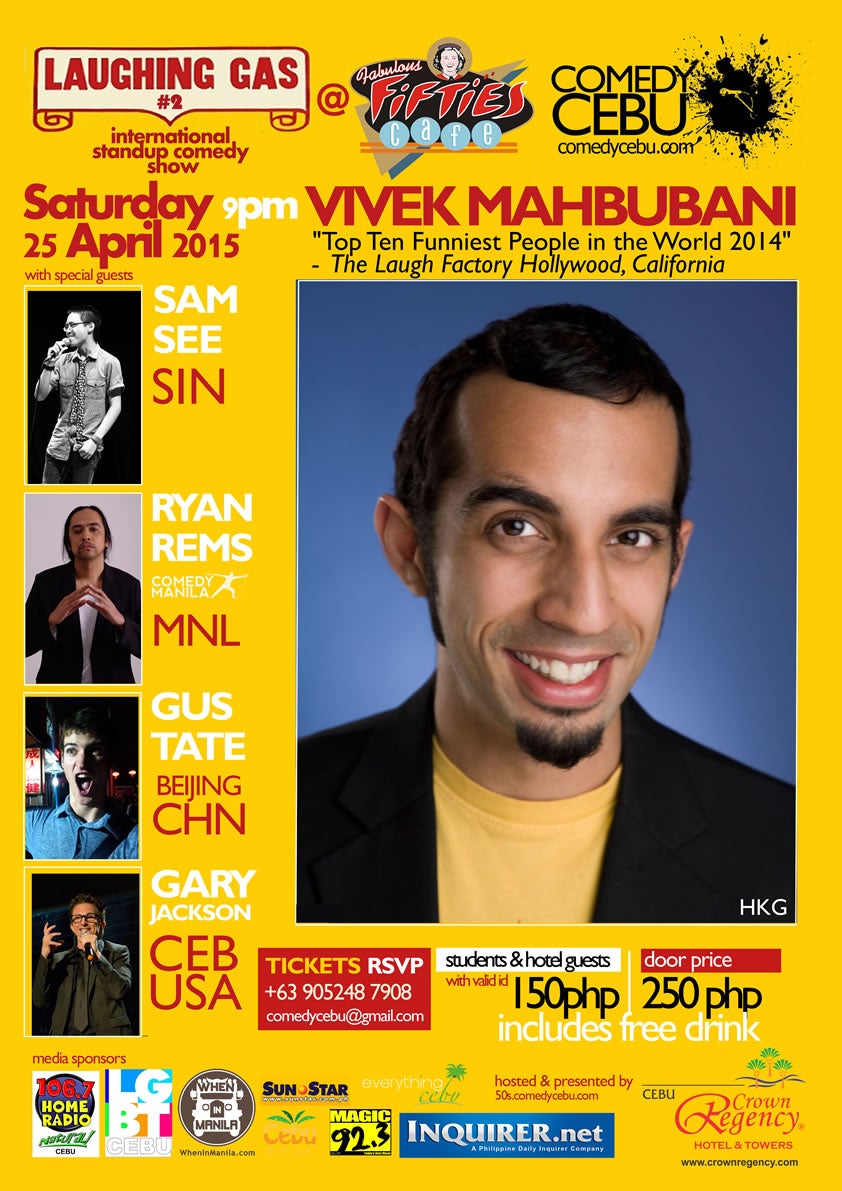 Cebu, Philippines – Comedy Cebu, the only Filipino and international point-of-view stand-up comedy group in Cebu, will be bringing some of the funniest stand-up comedians from around the world this April 23rd-25th to Metro Cebu!

The observational comedy group has been providing Cebu world-class comedy entertainment with its experienced performers in the art of stand-up comedy, using humor based on life experiences, social trends, human observation, without targeting or making fun of the audience- a fresh and equally enjoyable alternative to insult/drag comedy which is hugely popular in other Filipino comedy clubs and shows.
The upcoming events will not only bring observational stand-up comedy closer and available to the Cebu community, but will also help elevate Cebu City as one of the up and coming cities in the international comedy circuit around the globe.

VIVEK MAHBUBANI, an award -winning Hongkong stand-up comic, who has consistently headlined in both English and Cantonese shows, and who was also considered as one of 2014’s “Ten Funniest People in the World” by The Laugh Factory, Hollywood, California, will be leading this month’s lineup of world-class comics. The shows will also include Comedy Club China’s GUS TATE, Comedy Masala’s SAM SEE, Comedy Manila’s RYAN REMS SARITA, and last but not the least, the shows’ host and Comedy Cebu founder, GARY JACKSON. 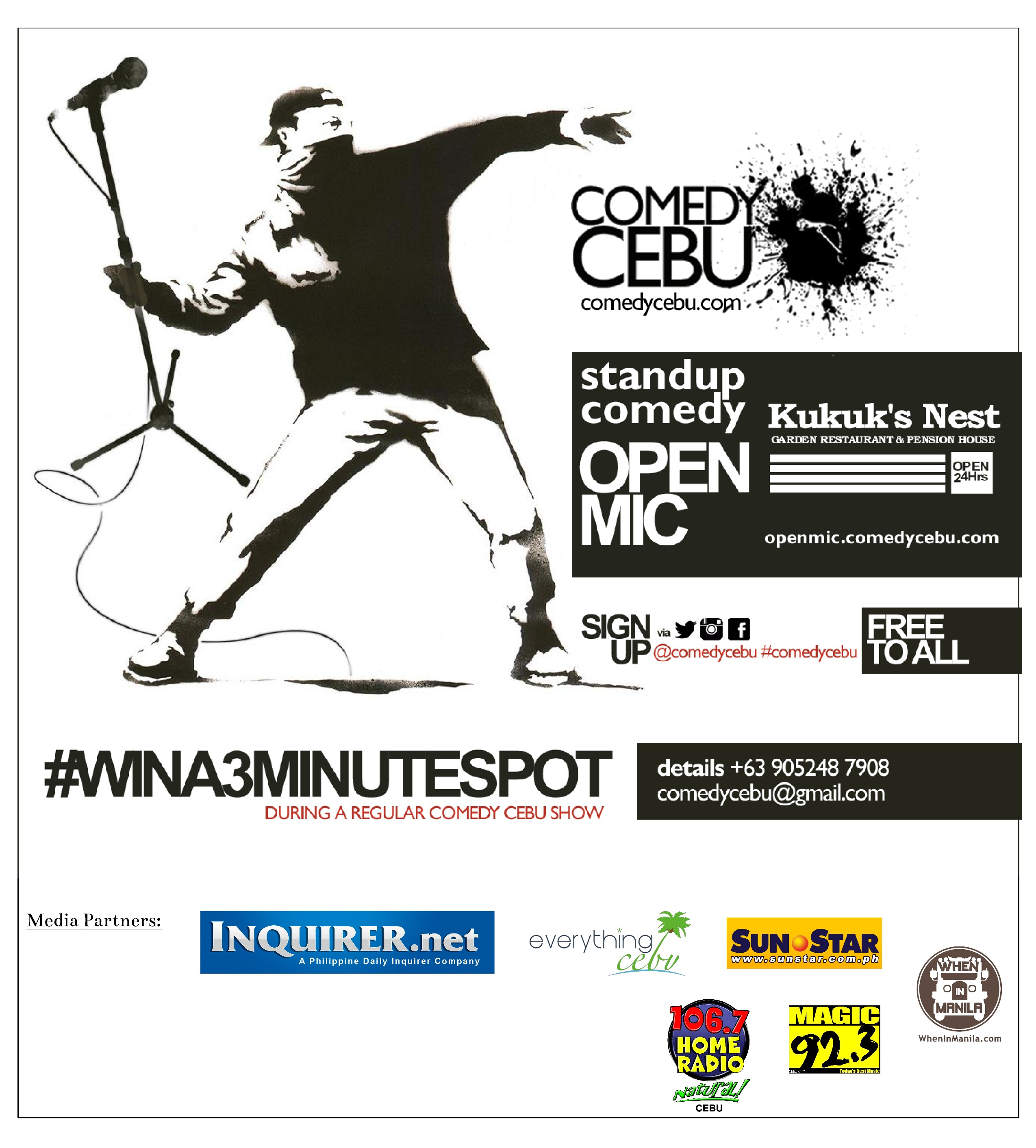 Comedy Cebu has been holding weekly #OPENMICTHIRSTDAYS at Kukuk’s Nest, 124 Gorordo Ave. since last February 26th, to encourage interested locals to practice point-of-view stand-up comedy. On April 23rd, Thursday, 9PM, the weekly open mic show will also serve as a contest. The winner at the end of the night will be the opening act for the following Saturday Show at Crown Regency Fuente. This month’s guest comics will be gracing the open mic. As usual, Comedy Cebu’s open mic shows are FREE. 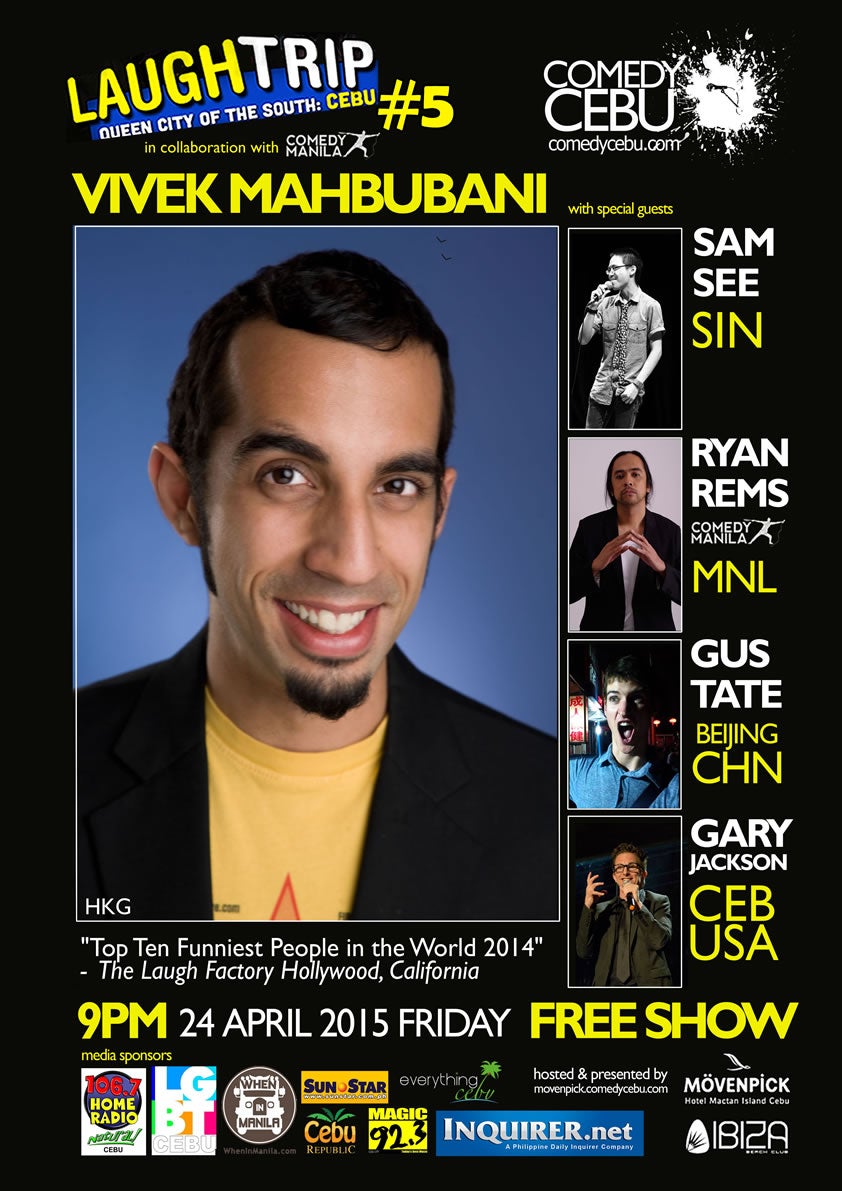 For a consumable amount of Php 1000nett/person, hotel guests and visitors alike can enjoy a Friday night of world-class comedy at Ibiza, which was recently awarded as Best of Cebu in Outdoor Dining Experience.

LAUGHING GAS #2’s tickets are already available for purchase and reservation at 250php per ticket which already includes a free drink. Students and Crown Regency Hotel’s checked-in guests may avail discounted tickets at 150php only by presenting their school ID and proof of stay, respectively. Tickets will also be available at the door on the night of the event.

Comedy Cebu encourages everyone to take advantage of this once-in-a-lifetime line-up during this exciting weekend of international stand-up comedy shows!