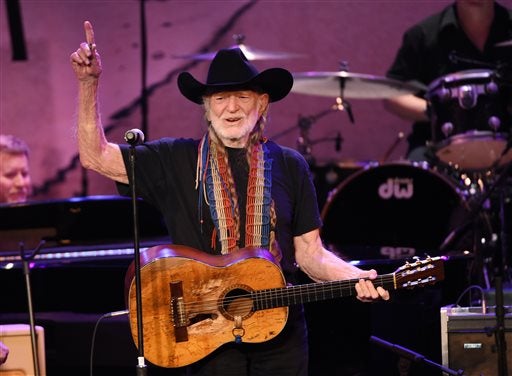 In this Feb. 5, 2015 file photo, Willie Nelson performs at the 17th Annual GRAMMY Foundation Legacy Concert at the Wilshire Ebell Theatre in Los Angeles. Nelson announced Monday, April 20, 2015, he plans to roll out his own brand of marijuana called “Willie’s Reserve,’’ that will be grown and sold in Colorado and Washington, two states where recreational use of the drug is legal. AP

SPOKANE, Washington—Country music star Willie Nelson announced plans on Monday to roll out his own brand of marijuana, capitalizing on his association with pot and the unofficial stoner holiday, 4/20.

The move makes the 81-year-old “Roll Me Up and Smoke Me When I Die” singer the latest celebrity to jump into the marijuana marketplace.

“Like other industries, branding and creative marketing is a big part of supporting legal cannabis products,” said Vicki Christophersen, director of the Washington CannaBusiness Association.

Christophersen said these connections continued a long tradition of celebrities endorsing the use of marijuana—even decades before it became legal for adult use.

Nelson, who was not available for comment on Monday, has well-established connections to cannabis. He’s been a decriminalization advocate and has been busted for pot possession several times. He also appeared in the stoner comedy “Half Baked.”

Washington and Colorado made pot legal for adult use in 2012. Oregon, Alaska and the District of Columbia also have removed legal restrictions, and more states are expected to vote on legalization next year.

The moves have created marketing opportunities, but links to celebrity smokers aren’t always considered a positive. This year, the National Cannabis Industry Association decided to drop actor Tommy Chong—costar of the “Cheech and Chong” comedy team—as it prepared to lobby Congress for pot-friendly regulations.

The group wanted to move past the stoner stereotypes it says Chong represents in favor of positioning pot as similar to fine wine.

Others see it differently, however.

Chong has an endorsement deal with Marisol Therapeutics, a pot shop in Pueblo, Colorado, that sells a strain in his name.

Store owner Mike Stetler called Chong marijuana’s equivalent to the Marlboro Man, and when it comes to pot pitchmen, he asked, “Who better?”

Read Next
‘The Trial’ on pay-per-view channel
EDITORS' PICK
High inflation: Your P1 is now worth only 87 centavos
UK’s Boris Johnson will resign, BBC reports
High-risk pregnancy: Reducing your risk is in your hands
Geek out at TOYCON 2022 powered by Smart Signature
House energy committee chair Arroyo bats for cheap electricity
Unemployment rate up to 6% in May
MOST READ
Suspect in grisly killing of missing woman in Bulacan arrested
Kim Atienza’s daughter flaunts bikini body in response to critics of her ‘revealing photos’
Number of active COVID-19 cases in PH breaches 11,000
Ex-Defense chief Lorenzana is the new BCDA chair
Don't miss out on the latest news and information.