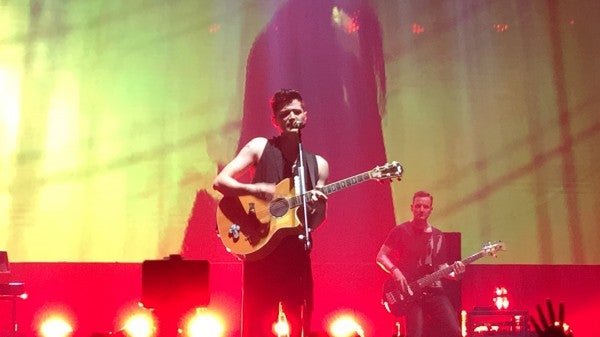 MANILA, Philippines—In a proud display of its heritage, Irish pop-rock band The Script began its Friday night concert at the SM MOA Arena with much fanfare and revelry as it marched to the stage accompanied by a bevy of its fans waving green flags while the distinctly Celtic blare of the Uilleann pipes in “Paint The Town Green” complemented the lights that bathed the entire venue in a viridescent tinge. It was immediately followed by the uptempo “Hail Rain or Sunshine.” Like any good Irish jig, the band’s opening performance left the crowd in very high spirits and raring for more. A very strong start for the trio and a good sign for everyone in attendance.

“Its a big, big honor to be back here again. You guys make us feel like the biggest band on the planet tonight!” vocalist and former The Voice UK judge Danny O’Donoghue said before the rest of the band, comprised of guitarist Mark Sheehan and drummer Glen Power, continued with “Breakeven,” a song from their 2008 eponymous debut album which set off their meteoric rise to stardom.

The house lights dimmed as the band members deftly regrouped and paced themselves while a 30-second behind-the-scenes footage of “Superheroes,” their first single from their latest album “No Sound Without Silence” (which this tour is in support of) played on-screen behind the stage. The arena then erupted into screams as the first few effusive notes of the song’s piano intro tinkled through the venue’s speakers. Looking very pleased with the crowd’s enthusiasm, Danny graciously let the crowd sing the first few lines as Mark, with a big grin on his face that belied his rugged exterior, throws a guitar pick at a girl passionately singing in front of the stage, making her jump up and down with joy as she showed off her prize catch to her friends.

The band then followed up with a fakey, playing the intro to “The End Where I Begin” then splicing in the soaring rap melodies of “Before The Worst.”

Playing on the crowd’s energy, Danny encouraged everyone to have “…a good old fashioned sing-along” as he split the crowd in two and had them sing “We Cry” before moving on to the smooth urban rhythm of “If You Could See Me Now.”

Mark Sheehan took over crowd-interaction duties as he talked at length about their harrowing experience filming the video for their next song, “Man On A Wire,” a charming ditty with a rousing chorus which, incidentally, is also their current single.

The band has always been known for its fan-approved, gimmicky stage antics. For the song “Nothing,” Danny asked the crowd to whip out their phones and call their exes. He then grabbed a random female fan’s phone and performed the song to, presumably, the ex who’s on the other end of the line.

For their requisite tour photo, Mark put on a pair of gold boxing gloves signed by Manny Pacquiao and posed as if knocking Danny out who pretended to be Floyd Mayweather — much to the audience’s delight — before performing the infectious “Good Ol’Days.” 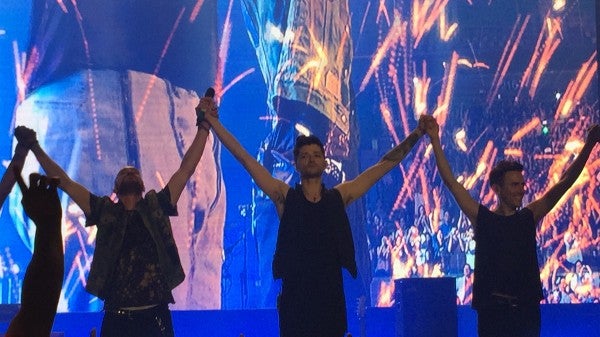 With the lights turned off, the band suddenly appeared on a second, smaller stage at the rear end of the pit with just enough space for a basic setup of an upright piano and a drum kit. Softly illuminated by purple hued spotlights from above, the band then performed tender, stripped-down versions of “Never Seen Anything Quite Like You” and “The Man Who Can’t Be Moved.”

As Danny once again disappeared from the stage, Sheehan was left playing an eighth note guitar riff which Glen Power locked in with a shuffling double time beat from the other end of the arena. The vocalist then suddenly appeared among the now-rowdy crowd at the lower box section of the arena holding a camera with a selfie stick that relayed his perspective onto the venue screen as he slowly made his trek to the stage while singing “You Won’t Feel A Thing.” Now back on the main platform, the band ended their set with “Six Degrees Of Separation” and the anthemic “It’s Not Right For You.”

After a short break, The Script began its encore set with a strong, epic performance of “The Energy Never Dies” followed by the poignant “For The First Time.”

“We’re gonna have to hear more noise if we’re gonna play another song!” yelled Danny soon after. The din of the crowd reached fever pitch as the swirling guitar parts of “No Good In Goodbye” stirred everyone’s emotions.

As the show drew to a dramatic close, the inside of the MOA Arena sparkled like a star-filled night sky as Danny coaxed every one in attendance to raise the glowing screens of their mobile devices overhead in a collective display of “…living in the moment.” The uplifting piano line of “Hall Of Fame” started playing and the crowd exploded in rapturous fervor. A stream of confetti rained over the crowd as the song reached its triumphant crescendo, a seemingly magical moment that, in Danny’s own words, “I will remember for the rest of my life.”

The Script Live in Manila was organized by Midas Promotions with INQUIRER.net as media partner.