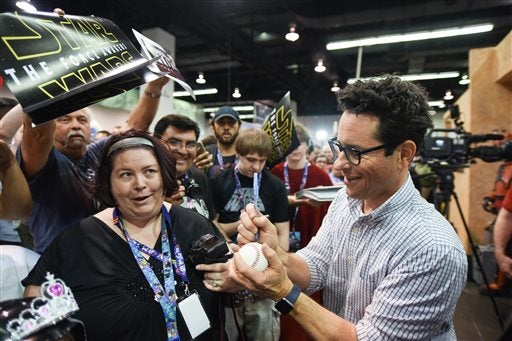 ANAHEIM, Calif.— Mark Hamill knew he had to say yes when George Lucas told him about the plans to move forward with a new “Star Wars” trilogy.

“It’s not like a choice. It’s like I was drafted,” Hamill told a massive crowd Saturday night at Star Wars Celebration of his decision to reprise his role as Luke Skywalker in the “Star Wars: The Force Awakens.”

“Could you imagine if for some reason I said ‘I don’t think I want to do it?’ I would have all of you surrounding my house like villagers, angry villagers with lightsabers instead of torches,” joked the 63-year-old “Star Wars” veteran.

Hamill admitted he was caught off guard when Lucas invited him to lunch. When Hamill’s wife surmised that perhaps there was a new film in the works, Hamill laughed. Lucas had told him specifically that he was done making “Star Wars” movies after the prequels.

He assumed Lucas was going to announce a 3-D release or roll out another box set of the films, laughing about the number of versions that have been made available.

Still, his interest was piqued when Lucas disinvited Hamill’s daughter. He knew that meant it must be big.

When things started coming together, Hamill said he was cautiously optimistic about J.J. Abrams, the chosen director for “The Force Awakens.”

“I was a little suspicious because he was a ‘Star Trek’ guy,” said Hamill, laughing.

The actor quickly clarified that he likes “Star Trek.”

He went on to compliment Abrams for his inclusiveness. Abrams, Hamill noted, is also the first “Star Wars” director to be borne out of true fandom of the original films.

“He feels the way you feel in terms of wanting practical effects. Real sets,” he said.

Keeping in line with the secrecy surrounding “The Force Awakens,” which opens on Dec. 18, Hamill said he is always worried about leaking information. He claims he even learned the subtitle of the seventh film on the Internet.

“They’re so secretive these days,” said Hamill. “When we did the first one no one cared.”

Hamill was “cleared” to tell the packed house that he did record a voiceover specifically for the new teaser trailer, which debuted on Thursday during the Celebration kick-off panel.

In the teaser, we hear Luke’s voice saying a familiar, but slightly altered line from “Return of the Jedi”: “The force is strong in my family. My father has it. I have it. My sister has it. You have that power too.”

He laughed and said that he kept messing up and saying: “My father had it.”

The end result is a combination of the original recording and Hamill’s new session, the actor said.

After playing the trailer once more in the large arena, Hamill marveled that there is “so much information there for you to speculate about” embedded in the footage.

“It implies so much that’s gone on from ‘Jedi’ till now,” he said.

“They don’t call it a teaser for nothing. They want to tease you.”