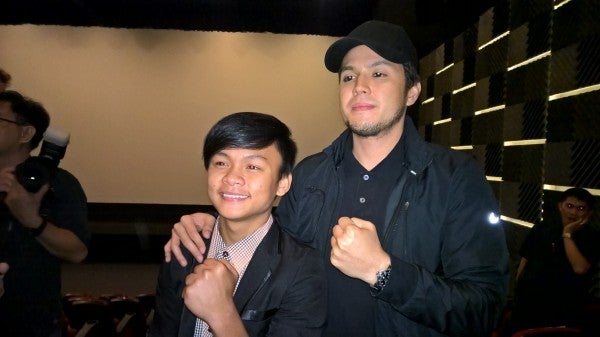 Director Paul Soriano and actor Buboy Villar pose before the fans during the premiere night of the film “Kid Kulafu”, held at Power Plant Mall in Makati City. ARVIN MENDOZA

Unlike any other movie depicting Pacquiao’s life, the film ships back its viewers during his childhood when he begins to dream big and embark on his ambitious journey.

READ: Paul Soriano: For viewers, ‘Kulafu’ will be like watching a miracle

The lush mountains of Bukidnon serves as young Manny’s home, the place where he first experienced worldly miseries brought by extreme poverty.

A traumatic event, where the whole family gets caught in middle of a hostile encounter between rebels and government forces, seemed to have a lasting imprint on Manny’s mind.

The family had to move to General Santos City and start anew. Manny had to collect bottles of Kulafu, a liquor brand, for his uncle Sardo (Cesar Montano) in exchange for the help he extends to his family. With his uncle as his mentor, Manny discovers his flair for jabs and hooks. From then on, he becomes strong-willed and unstoppable, keeping his desire to end the ordeal of his family while shaping and giving meaning to his own destiny.

Soriano’s treatment of “Kid Kulafu” is nothing less than raw and untamed, humanizing the characters to the point of immortalizing them.

Perhaps he recognizes the linear structure inherent in the story, with his obvious thirst only to tell a zero-to-hero tale. And so he knows better than hurry the exposition of the narrative. He lets his characters breathe, enjoy, muse and fret. He bids the audience welcome and feel the angst, the desperation, the growth and the hope tucked in helms of the story.

Moreover, the film’s cool, crisp and classy cinematography is very impressive. The playful shots will make the audience stare agape at the screen, turning plain moments to an exciting adventure. The musical score, too, was spot-on, enlivening the scenes in a very affecting manner. Pleasingly memorable was Manny’s dream sequence. It was short and chimerical, but it managed to give off enough dose of cathartic effect. 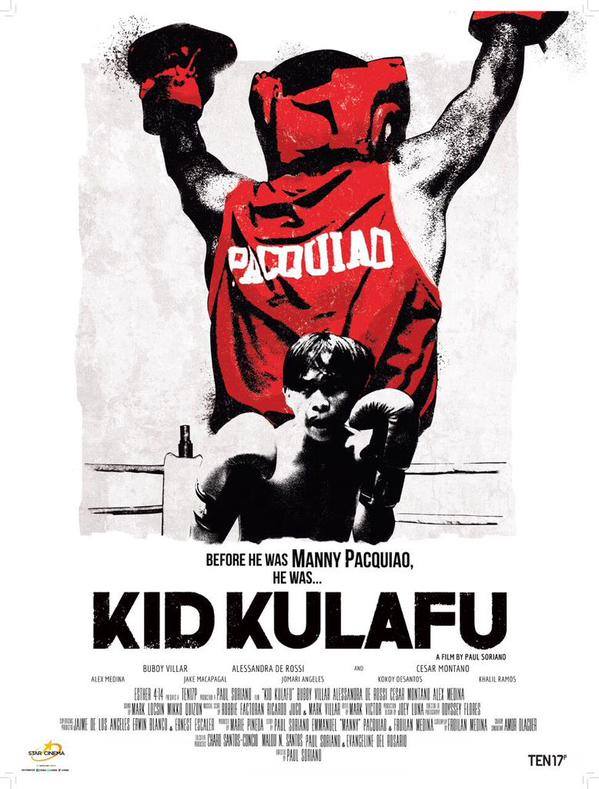 The movie poster of of “Kid Kulafu”. PHOTO from the movie’s Facebook page

Alessandra de Rossi, meanwhile, was one helluva fun to watch as Manny’s mother, Dionisia. She effectively plays her role, banking on her usual antics and impulsive behavior which add brightness to the film’s wretched atmosphere. But when she does her job as a mother, one can’t help but admire her warmth and love for her family. De Rossi’s portrayal always turns effectual, compelling the audience to empathize with her.

Cesar Montano, Jake Macapagal (Dizon) and Alex Medina (Manny’s father Rosalio) all did their part well, save for some inconsistencies in the language and accent, where their tongues would suddenly slip from Gen San’s vernacular to Tagalog.

Of course, most of the tear-jerking scenes were induced by Buboy Villar’s eloquent performance as the young Pacman. The young actor was a surprise: displaying forceful acting chops and mighty stamina in the boxing fights.

READ: Paul Soriano: A lot of Kid Kulafu is still in Manny Pacquiao

His breakdown scene, after the tragedy involving his cherished comrade Eugene (Khalil Ramos), was so movingly sharp it pierces a knifelike torment to the bone, leaving one completely scarred and sobbing.

Soriano genuinely makes full use of Villar’s fiery zeal for his craft. He clearly knows when and how to strike a chord on people’s hearts. His ability to portray Manny’s derelict state as a budding boxer, his battles along the way, his triumphs and downfalls, his concern for his family and friends and his undying love affair with his chosen sport could not be matched with wordy compliments.

For some, Kid Kulafu may just stem from a cheap liquor or a comical moniker for a neophyte athlete. But for many, it is a lasting insignia of Pacquiao’s inspiring hard work, passion and dedication.

“Life is harder than boxing,” Manny said in the film. It’s true. But he did hold out to black eyes, bruises and body pain, much more to life’s ultimate challenges. He proves you can catch the sun, the moon and the stars, if you set your heart and mind to it.

Overrated or not, commercialized or not, propaganda or not, one thing is for sure— “Kid Kulafu” is a knockout of a movie! IDL