Meet Cody and Caleb Walker, the men who filled in for Paul Walker in ‘Furious’ 7 | Inquirer Entertainment
Close
menu
search

Meet Cody and Caleb Walker, the men who filled in for Paul Walker in ‘Furious’ 7 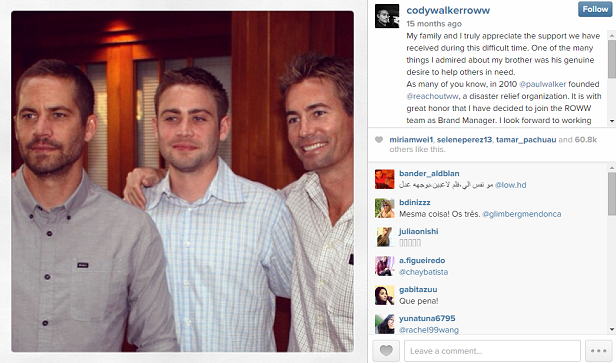 AS the seventh installment of the “Fast and Furious” franchise zoomed to the top of box office charts following its worldwide release, fans saw how Paul Walker, the actor who played the role Brian O’Conner on the films, was honored to a final send-off.

After Paul Walker’s death in a car accident in November 2013, filming for “Fast and Furious 7” was delayed in order to rewrite the script so as to “retire” his character. To complete new scenes leading to Brian O’Conner’s “retirement” in the franchise, Walker’s two brothers, Cody and Caleb, were brought in to act as body doubles.

Both Cody and Caleb resemble the body build and the face of their late brother. In “Furious 7,” a computer generated imagery (CGI) of Paul’s face was placed on top of the faces of his brothers to complete the film’s scenes.

According to a report by India Times, the film used “CGI, carefully chosen camera angles, and the right lighting” to simulate Paul’s appearance.

A former paramedic, 26-year-old Cody Walker, is the youngest of the Walker brothers. He is the brand manager of Reach Out World Wide, a non-profit organization started by his late brother.

After finishing filming the scenes for Furious 7, Cody said in an interview with InTouch Weekly that he will try his hand in acting.

Cody is said to be the Walker brother who is more vocal on Paul’s passing. During the film’s premiere, he told People.com that he knows that Paul will be proud of their work.

“I’m so happy with it. It was just so tastefully done, and a great ending after everything,” he said.

On the other hand, 37-year-old Caleb also stood as body double for Paul in the movie. India Times reported that he filmed scenes in Abu Dhabi with the cast.

On filming the scenes, Furious 7 director James Wan said that the Walker brothers needed to undergo an acting workshop because “they have not worked before the camera.” Wan said that he tapped an acting coach and actor John Brotherton to help the brothers.

“We brought on an acting coach who, with John Brotherton, worked with the brothers. They’d never been in front of the cameras before. Those poor guys went through a crash course in knowing how to perform for the camera. It was a whole different world for them and I think they had new found respect for what their brother did. I was very grateful to have the family involved,” he told Variety.

As of Monday, the action film has raked in more than $800 million worldwide since it premiered last April 3. AJH/AC