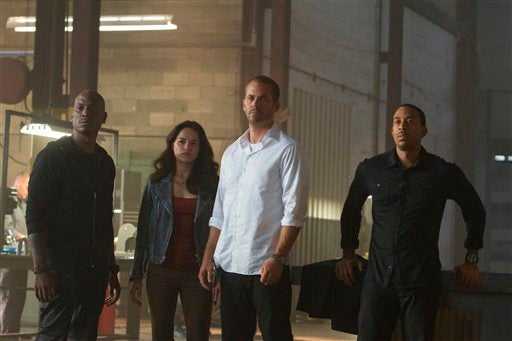 This photo provided by Universal Pictures shows, from left, Tyrese Gibson as Roman, Michelle Rodriguez as Letty, Paul Walker as Brian, and Chris Ludacris as Tej, in a scene from “Furious 7.” (AP Photo/Universal Pictures, Scott Garfield)

“Furious 7,” the seventh in the street-racing and stunt-filled franchise, pulled in $143.6 million over its opening weekend, according to preliminary figures from box-office tracker Exhibitor Relations.

The film features the late Paul Walker, who was killed in an unrelated car crash in November 2013 while the film was still in production.

“Going well beyond a pitch-perfect marketing campaign and a great release date, the enthusiastic and devoted fan base came out in droves to support the franchise and the late Paul Walker — and the results are staggering,” senior media analyst Paul Dergarabedian, of the box office tracker Rentrak, said in a statement.

In second place was animated children’s film “Home,” about an unpopular space alien forced to flee his own kind. It earned $27.4 million.

Pulling in nearly $13 million and scoring third place was buddy comedy “Get Hard,” about a prison-bound white investment banker (Will Ferrell) who hires a black car washer (Kevin Hart) for lessons on surviving the slammer.

“Woman in Gold,” which tells the true story of an elderly Holocaust survivor trying to get her Nazi-looted artwork back from the Austrian government, debuted in seventh position with a $2-million haul.

Religious drama “Do You Believe” took ninth place with $1.5 million.