Moving passage to Samar for visiting, and unrecognized, film luminaries 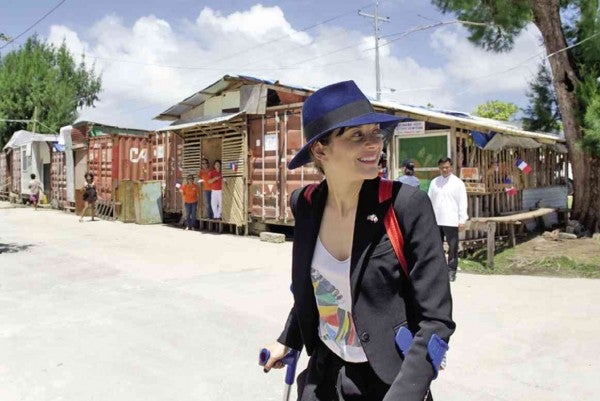 FRENCH actress Marion Cotillard, although in crutches walked—freely—around the streets of Guiuan, Eastern Samar, on Feb. 27. She took lots of photographs and vowed to return soon. INQSnap this page for additional content. AFP

The first thing that struck Oscar-winning actress Marion Cotillard was the cheerful smile of Filipinos.

To think, she said, that people of Guiuan, Eastern Samar, are in the midst of recovering from the devastation caused by Super Typhoon “Yolanda,” which struck the Visayas in 2013.

“Aside from the fact that people here are so nice, the general feeling is that Filipinos don’t regard themselves as victims, but more as survivors who need to face a new climate, who are willing to rise from the ashes,” she told the press in an impromptu interview held at the European International School in Parañaque, only minutes after she arrived from Guiuan.

It was a hectic two-day visit, Cotillard said with a sigh, but she made sure to sample Filipino food. During the state dinner held at the Malacañang Palace on Feb. 26, the French delegation feasted on kilawin, adobo, kapeng barako and brazo de Mercedes.

“I got to try mangoes,” the actress told the Inquirer.

(From Samar, the French delegation went straight to Eurocampus to meet with the expatriate community on Feb. 27, before flying back to France.)

“The Philippines is on the frontline of the destructive effects of climate change,” noted Cotillard.

“Guiuan was the right place for President Hollande to call upon world leaders to act on this issue,” said Cheikhrouhou. “World-renowned actresses like Marion and Mélanie reinforce the urgency of the message and help raise awareness that climate change will affect us all if we fail to act decisively.”

Cheikhrouhou, who joined the French contingent in Samar, remarked: “Marion and Mélanie are passionate about defending the environment. I salute them and hope we can count on more effective advocates [like them] in the future.”

Camille Conde, press attaché of the French embassy in Manila, told the Inquirer that the two actresses walked around freely in Guiuan.

“After a short dialogue at the municipal hall, on foot they went to the port to meet with fisher folk,” recalled Conde, who was also in Samar. “They went around the public market, visited a church and, lastly, a school.”

Most of the residents in Guiuan “had no idea that Cotillard and Laurent were big names in Hollywood,” Conde related. “Even so, the people of Samar gave them a warm and typically Filipino welcome.”

Cotillard won an Oscar best actress for “La Vie en Rose” in 2008 and was nominated this year for “Two Days, One Night.” Laurent starred in “Beginners” and “Inglourious Basterds.”

Even though she was in crutches, Cotillard joined the group in a walking tour. “It was evident that Marion and Mélanie had fun. Mélanie kept taking photos of the town and the people. They posed for snapshots with the Filipinos and talked to everyone they met on the streets,” Conde related.

Hollande and the actresses lingered for such a long time in the town that the program in the Guiuan East Central Elementary School was slightly delayed.

“They couldn’t even stop for lunch,” Conde recounted. “But they were obviously touched by what they saw in the town and its people.”

Cheikhrouhou described the trip as “moving.”

“The people of Guiuan reminded all of us that Filipinos are extremely resilient,” Cheikhrouhou said. “Although Filipinos are exposed to the destructive reality of climate change, their determination to rebuild was admirable.”

Cheikhrouhou said the Green Climate Fund’s mission is “precisely to help the most vulnerable communities to mitigate and adapt to climate change’s effects. We don’t want climate change to become the ‘new normal’ as a young girl from Guiuan told us.”

In the school, a group of students serenaded the foreign visitors. It was a thanksgiving song—expressing gratitude to the people who helped the country in its rebuilding efforts.

“It was very beautiful,” Cotillard described her experience in Guiuan. “I was able to hear people speak and share ideas…There is positive energy there. And positive energy is what the world needs right now.”