Nora Aunor is happy to see that many young people in her home province are familiar with her work
By: Bayani San Diego Jr.
Philippine Daily Inquirer / 12:09 AM April 02, 2015 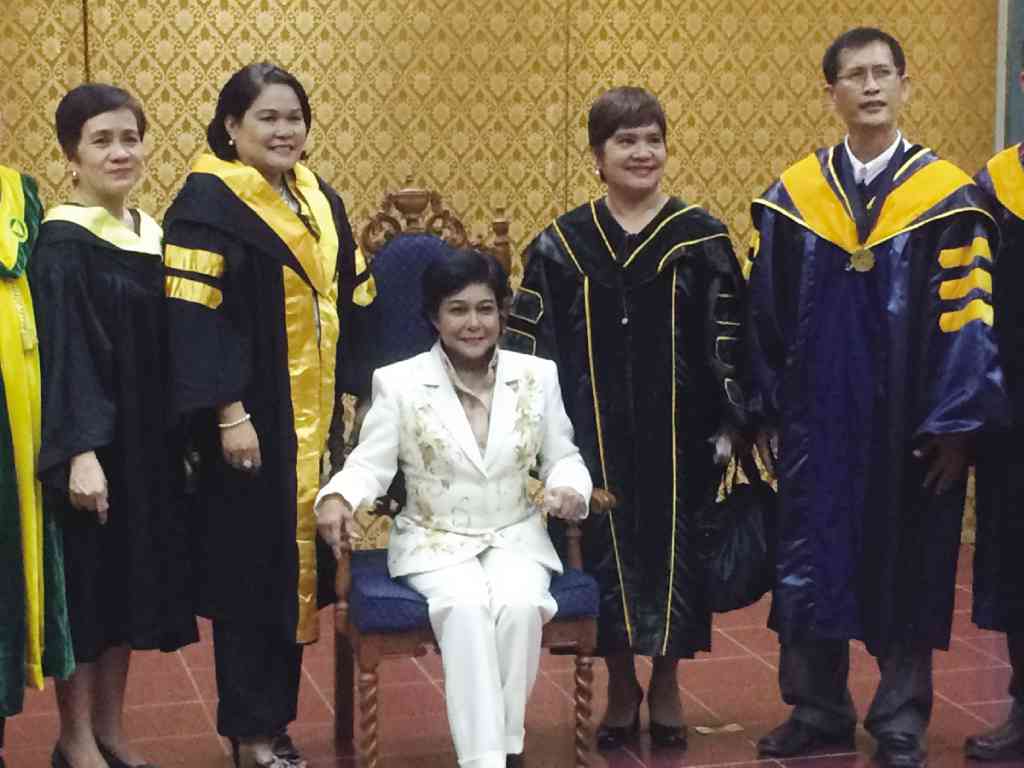 THE SUPERSTAR is feted like royalty by department heads and faculty of Ateneo de Naga. PHOTOS BY BAYANI SAN DIEGO JR.

NAGA CITY—The famous eyes turned misty as she looked out the hotel window.

“Ay, memories,” Nora Aunor replied when asked what went through her mind upon seeing the stage at Plaza Quezon where she competed in the amateur singing contest “Liberty Big Show” as a wee kid, and won.

“My dress was old and worn,” she recalled, speaking in Filipino. “We had taken the train from Iriga. Though it was not fiesta time, there were many people in the plaza. They wore nice, expensive clothes.”

The Superstar, as Aunor is known in local show biz, visited this Southern Luzon city from March 25 to 28, to receive two awards—one from the local government, which proclaimed her an adopted Nagueña, and the other from Ateneo de Naga, which gave her the university’s highest honor,

It was a sentimental journey.

From Legazpi, she and her team motored north to Naga on March 25, driving by her hometown, Iriga, Camarines Sur.

At the Iriga City Public Library, longtime friend John Rendez checked out the Nora Nook, which displays a modest collection of memorabilia. He promised to donate a few more items to the exhibit.

The city librarian’s only request, actually, was a snapshot with the singer-actress, who had stayed in the van. Of course, she readily climbed out to grant the librarian’s wish.

On the way to Naga, the van passed by Iriga Central School. Aunor said, “That’s where I went to elementary school.” One of her few childhood photos, she added, is from the year she graduated there, with honors. 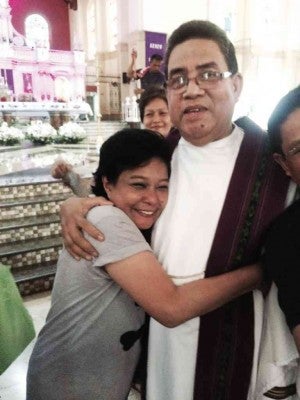 FR. JULITO Heraldo gets a hug from his idol at the Basilica Minore.

In the morning of March 26, Naga City Councilor Nathan Sergio took her to Lake Buhi Resort, in nearby Buhi, where she met owner Cyrus G. Obsuna.

Obsuna is a cousin of soprano Fides Cuyugan-Asensio, who was a judge in “Tawag ng Tanghalan,” an amateur singing contest in Manila where Aunor emerged champion in 1968.

That afternoon, Aunor and several “Noranians” who had traveled by bus from Manila attended a thanksgiving Mass at the Basilica Minore of Our

In his homily, Heraldo recounted that, as a child, he prayed for a star he could idolize. The answer, he said, came in the form of the little brown girl from Iriga who topped “Tawag ng Tanghalan.” He confessed, “There are two persons I admire in this world—Pope Francis and Nora Aunor.”

That evening, heeding his idol’s request, the priest attended the Honorary Nagueña ceremony at the Avenue Plaza Hotel.

Mayor John Bongat presented Aunor with the key to the city, along with a framed resolution declaring her an adopted Nagueña.

Since she joined a rally demanding the resignation of President Aquino recently, some feared that her Naga honors would be scrapped. The awarding pushed through, filmmaker Kristian Sendon Cordero

explained, because this city “takes pride in being a bastion of free expression.”

The next day, at the Ateneo de Naga, Aunor received a rousing welcome from a crowd of over 2,000 gathered in the covered court.

During the processional march, the venue erupted in applause from the graduating students and their parents.

“I was so nervous,” Aunor said. “I was not sure how they would accept me.”

She recalled being snubbed by province mates who dismissed her as bakya (cheap) when she was just starting in show biz. Seeing the people’s excitement, she said, “My nervousness [intensified].”

She was pleasantly surprised that young people were familiar with her work. (Her old movies are shown on free TV, cable, DVD, YouTube—and on a big screen on campus.)

Rendez told the Inquirer, “We have teachers to thank for this. They pass on their love for her to their students.”

Cordero, a faculty member at Ateneo de Naga, added that Aunor’s songs are played regularly on campus.” Next year,” he said, “we hope to hold the first Nora Aunor film festival, with the help of the local government and other institutions. There is also a proposal to [erect] a statue of Nora as a child at Plaza Quezon.”