‘Onra,’ no less, for Nora Aunor

Bicol University welcomes the Superstar as it would a homecoming queen
By: Bayani San Diego Jr.
01:24 AM March 27, 2015 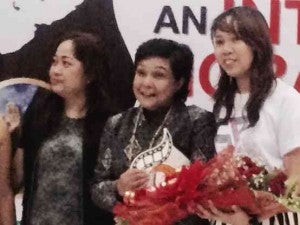 LEGAZPI CITY, Albay — Bicolanos treated her like a homecoming queen. Quite fittingly, the citation given by Nora Aunor’s fellow Bicolanos was named “Onra,” the Bicolano word for honor.

On Tuesday, students, faculty members and fans feted Aunor at the Bicol University.

At the Bicol University, Aunor was given two awards—one from the Communication Students’ Association and the other, from the Ako Bicol party-list group. (Aunor hails from Iriga, Camarines Sur, two hours away from this city.)

The Onra award came from Ako Bicol, which vigorously defended the actress after her name was dropped by Malacañang from the official list drafted by the National Artist search committee.

Rep. Rodel Batocabe of Ako Bicol related that Aunor and late filmmaker Manuel Conde would have been the region’s first two national artists. (The Palace has yet to confer the honor on Conde, who was declared national artist in 2009, and on the artists in Aunor’s batch.)

Beyond the national artist issue, however, Aunor, known as the Superstar in local show biz, welcomed the opportunity to interact with Bicol’s young people.

Upon her arrival on Monday, she chanced upon graduating students in their togas at the lobby of La Piazza, where she was staying. She gamely posed for souvenir snapshots with them.

She jested that receiving an award from a learning institution never fails to make her feel like a fresh graduate.

Rep. Edcel “Grex” Lagman of the first district of Albay recounted that his mother, Cielo Burce-Lagman, was Aunor’s English teacher at the Generosa de Leon Memorial High School-Centro Escolar University, Parañaque in the 1970s. Aunor joked that she often cut classes, as she was already working as a singer-actress then.

Lagman contradicted Aunor by quoting his mom who, he insisted, described the Superstar as “an excellent student.”

Videos of the actress’ award-winning performances were shown during the ceremony. Students regaled the honoree with song-and-dance numbers as well.

During her acceptance speech, which she delivered in Bicolano and Tagalog, Aunor recalled her struggling days—anecdotes that Noranians know by heart—among them her selling iced water at the train station, and competing in, and winning the “Liberty Big Show” singing contest in Naga, Camarines Sur.

She urged the students to pursue their dreams and vowed that she would hold a free concert next time she was in town. Aunor, who lost her singing voice five years ago, is set to undergo treatment in Boston in June.

She is also in the province to drum up support for her coming indie film, Kristian Sendon Cordero’s “Hinulid,” which will have Rinconada Bikol dialogue. Interestingly, it will be Aunor’s first film in her native tongue.

Filming starts in May, she told the Inquirer.

Today she will receive an award from Ateneo de Naga, where Cordero is a faculty member.