Ariana Grande’s ‘The Honeymoon Tour’ to drop by Manila 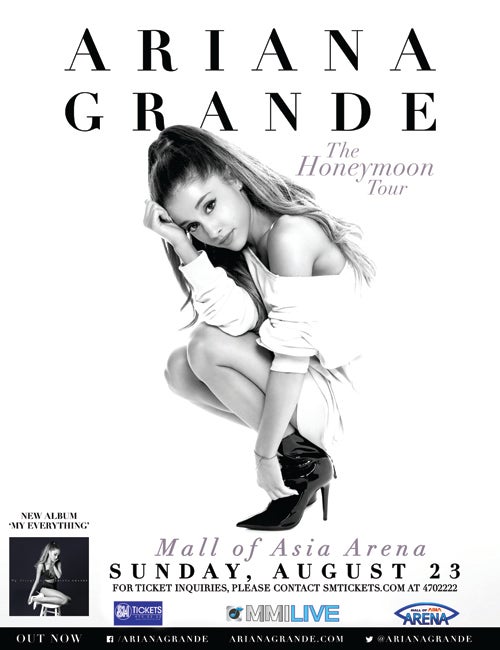 Through an e-mail, Sy told INQUIRER.net that Grande is slated to perform a headlining show dubbed “The Honeymoon Tour” at Mall Of Asia (MOA) Arena on August 23, 2015, Sunday.

But while the concert date and venue are already confirmed, ticket prices are to be announced a little later on.

Grande, 21, was at first active in acting in TV and musicals. She was part of a generous amount of Broadway musicals prior to landing her claim-to-fame role Cat Valentine in the 2010 Nickelodeon series “Victorious.”

Also in 2010, Grande was offered to sign a contract with a big record label after she was scouted by a friend of the label’s CEO on the online video sharing site YouTube. Grande has since then pursued her ultimate love, which is music.

Currently, the Broadway actress-turned pop/R&B sensation has released two albums; “Yours Truly” in 2013 and “My Everything” in 2014.

For “The Honeymoon Tour” ticket pricing and sales details, keep a lookout on INQUIRER.net.