One Direction whips up Manila fans under the drizzle 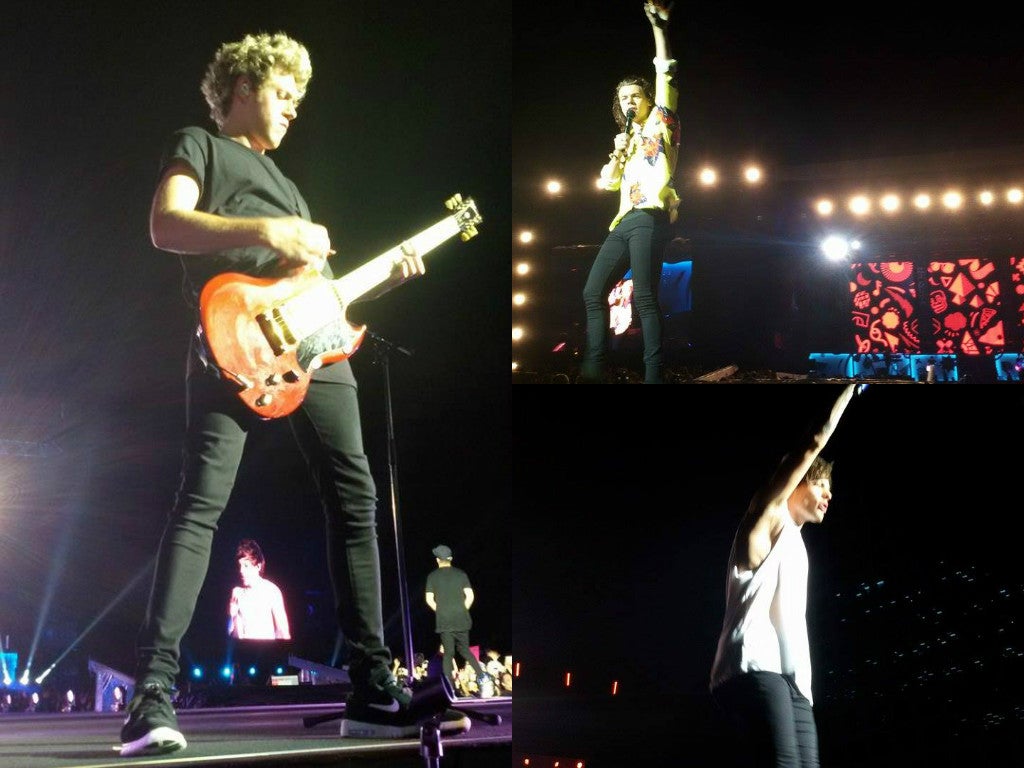 MANILA, Philippines–If Day 1 of One Direction’s (1D) “On the Road Again Tour” in Manila had fans sweating due to the humid weather, Day 2 was the exact opposite because it was drizzling until the group minus Zayn Malik came out on stage. And for this, the boys endlessly thanked fans for “standing out in the rain.” 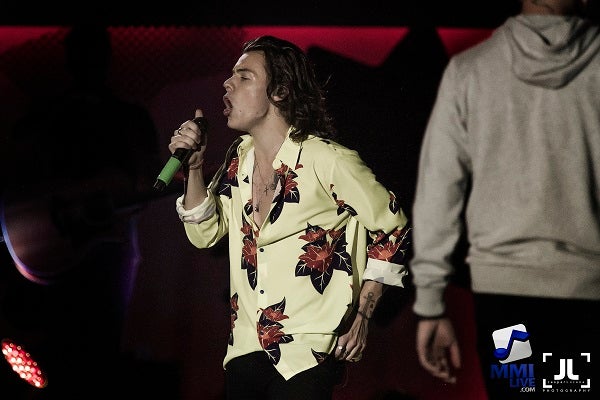 But prior to Harry Styles’s proclamation that “In last night’s show (March 21) we (1D) fell in love with Manila,” and Liam Payne’s “Are you louder than yesterday?” challenge to the Day 2 crowd, the group first opened the set strong with “Clouds,” followed by two certified crowd favorites “Steal My Girl,” and “Little Black Dress.”

Niall Horan and his strings were inseparable the entire night while Louis Tomlinson was seemingly timid even while hitting his notes for the night.

The group then performed “Where Do Broken Hearts Go,” “Midnight Memories,” and “Kiss You,” which Liam topped with “We Want to Kiss You Manila!”

“Stockholm Syndrome,” “Ready to Run,” “Strong” and “Better than Words,” filled the Mall Of Asia (MOA) Concert Grounds next, and then Niall took fans to a throwback to when he wrote the next track which was “Don’t Forget Where You Belong.” 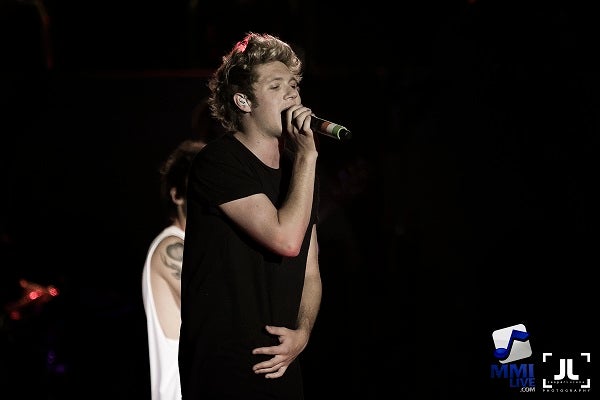 Niall said he had fans in mind when he was writing the song because they are the reason why he and the group are now able to travel to different beautiful countries “like Philippines.”

1D then slowed things down, while still showcasing powerful vocals and soul, with “Little Things” and “Night Changes.”

But after giving fans some serene moments to savor, the boys revived the lively mood with “Alive,” “Diana,” and classic 1D tracks “One Thing” and “What Makes You Beautiful” from the group’s debut album “Up All Night.”

“Through the Dark,” which came next, displayed 1D’s mature and country-like sound, “Girl Almighty” brought back the pop, and then “Story of My Life” served as an open window showing more of the members’ artistry and musicality.

For the encore, 1D played “You & I” and “Little White Lies,” and then the show ended with what seemed to be the perfect closing track, the “Best Song Ever,” which was followed by a fireworks display. 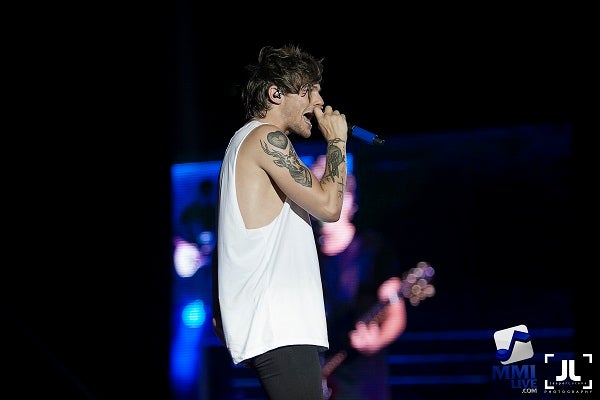 Before the group performed the final song, Niall said, “I feel sorry for other countries because they have a lot to live up to,” pertaining to 1D’s Manila gigs which the band members themselves called “one of the loudest” and “one of the best” they had. 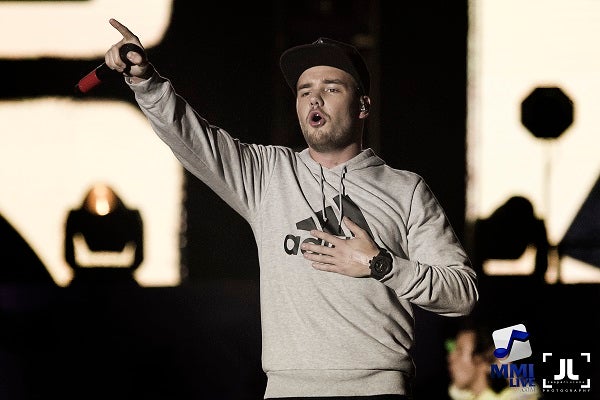 In between songs, the boys kept telling fans how they have been “incredible” and “amazing” in both nights of the show. Liam even took the interaction to a whole new level when he read fan boards with messages saying “Liam, I am your long-lost daughter,” “Louis, you put a*s in potassium,” and “Can you say nakakapagpabagabag?”

At one point, Liam and Harry even had a “food showdown” after Liam said he wanted nuggets, but Harry immediately countered with “healthy eating!” and “vegetables!” 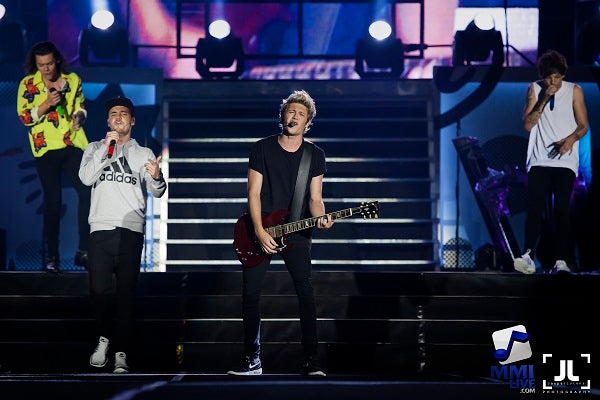 On a more serious note, despite the fact that most of 1D’s songs are categorized under the pop genre, the group doesn’t fall short in offering different flavors because the lads composing 1D are ‘of different genres’ themselves.

During “On the Road Again Tour,” Niall and his guitar were the acoustic heartthrobs, while Louis and his sweet husky voice were the natural breath-takers. Liam’s “It’s getting hot in here” and swirls with two hands held up mid-level supplied a dosage of R&B while Harry was the passionate rock star with the strange yet appealing rhythm.

Truth be told, it was surprising to see such diversity on a 1D concert stage, because to a neutral party like this writer, the group–at first–seemed like your typical “act as cute as you can on stage” boy group—but no. Niall, Liam, Harry, Louis and absentee mate Zayn know who and how they are as artists, and that’s what seemingly works as the best potion for them and their fans–the lads’ conscious effort to go just toward one direction despite their differences in terms of artistry and, perhaps, personality.

The group may have been one man short during its two-night show in Manila but, apparently, it was effortless for the remaining four to bring the house down with their “killer tracks,” which had fans grooving under the rain.

One Direction’s “On the Road Again Tour” was organized by MMI Live and Ovation Productions, with INQUIRER.net as media partner.

IN PHOTOS: One Direction plays first show in Manila

One Direction, minus one, takes Manila by storm