Tinashe to perform at Raven Club Manila on March 26 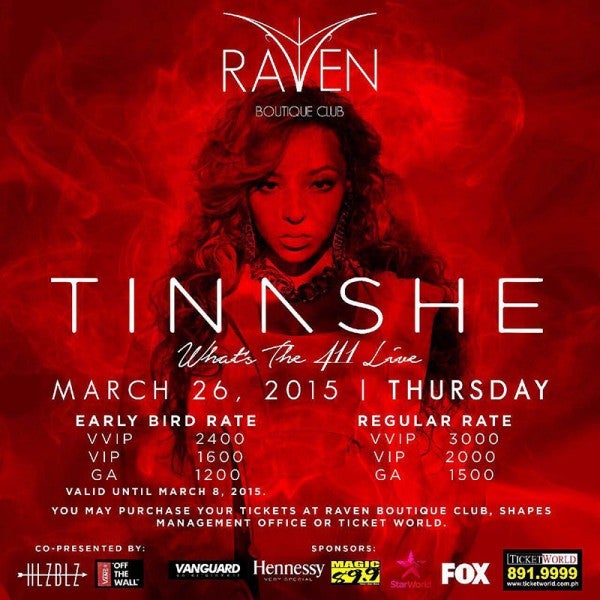 MANILA, Philippines—Tinashe, the stunning 21-year-old singer, songwriter, producer and performer, radiates a distinct and dynamic vision of R&B punctuated by hip-hop attitude and pop flavor with a DIY-or-die mindset.

Tinashe will be performing at BGC’s Raven Boutique Club on March 26. The show, dubbed “What’s the 411 Live,” will start at 10 p.m. Tickets are available at Raven Boutique Club, Shapes Management office, www.ticketworld.com.ph or http://goo.gl/j2vF9n.

Last summer, she performed “2 On” at the BET Awards pre-show and “The Wendy Williams Show,” while also wowing audiences across the country with her captivating live show. In December, she made another major television appearance at Jimmy Kimmel Live. Watch it here: https://youtu.be/GbENFUjYdng

Her debut album “Aquarius­” is now available now on iTunes and Spinnr.ph.

The album, which Tinashe wrote and recorded in New York, London and Los Angeles, found the budding star at the forefront of modern R&B. Its dynamic set of songs is a nod to her 90s upbringing with their DNA planted firmly in the future.

Tinashe shaped the album over 2013 and 2014 with the likes of DJ Mustard, Redwine and DJ Marley Waters (all three producing on the ubiquitous “2 On” featuring ScHoolboy Q), Boi-1da, Jasper, Future, Stargate and several other surprise guests.

“Aquarius is my official album introduction to the world and represents a new season of music and art,” said Tinashe. “I cannot wait to finally share with the world what I have been working so hard for in the past few years. This is just the beginning.” An official trailer for the album can be viewed here: http://youtu.be/Mn4MOhBZLdA.

The album’s first single “2 On” featuring ScHoolboy Q—which The Fader called Tinashe’s “star-making moment” and The New York Post recently dubbed one of 2014’s songs of summer—reached the summit on the US Rhythmic Airplay chart, where it remained at No. 1 for four weeks. The song also hit No. 3 on Billboard’s Hot R&B Songs Chart.

Recently, Grammy award-winning rapper Drake remixed the song. The eye-catching video, which highlights Tinashe’s magnetic and charismatic skills as a performer and dancer, has amassed nearly 64 million views to date. Watch the video for “2 On” featuring ScHoolboy Q here: http://smarturl.it/2OnVideo

Proving to have an esoteric side, Tinashe has incorporated pan flutes and thudding synths into her latest R&B-pop single, “All Hands on Deck,” with a remix featuring Iggy Azalea.

“All Hands on Deck” is the latest single from Tinashe’s album “Aquarius,” which recently landed at No. 3 on Billboard’s list of The 10 Best R&B Albums of 2014.