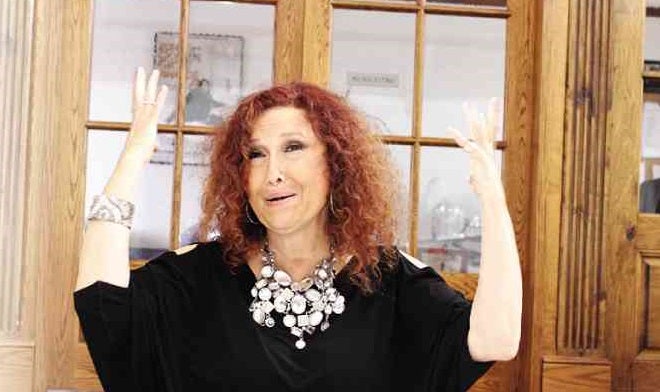 LOS ANGELES—Surely, Melissa Manchester must have performed in the Philippines. After all, when you’re in the Philippines, not a day goes by that you don’t hear Melissa’s “Don’t Cry Out Loud” or “Looking Through the Eyes of Love”—whether playing on a cab radio in Manila or being sung by an entertainer on a river boat cruise in Bohol. To our surprise, Melissa said she had never been to the country where she remains quite popular.

“Get me there already, please!” exclaimed the Grammy-winning singer-songwriter during a recent chat in West Hollywood. “Come on!” She was a live wire with frizzy red hair, clad in black and wearing silver and crystal accessories.

“I’ve never been there (the Philippines),” said the artist who also sang “You Should Hear How She Talks About You.” “No, no, no,” she stressed. Melissa revealed that she was scheduled to perform in Manila years ago, but that didn’t pan out.

Melissa, who has a new album (her first in 10 years), “You Gotta Love the Life,” still keeps a busy concert schedule. For the past five years she has been an adjunct professor at the University of Southern California (USC) Thornton School of Music. We’ll get to those later.

We asked Melissa, who cowrote the pop classic, “Whenever I Call You Friend,” which of her songs she treasures the most. She answered, “I have a fondness for ‘Midnight Blue’ because it was my first (US Top 10) hit. ‘Don’t Cry Out Loud,’ because it touched a nerve. It took me a while to understand it because when I first heard the song by the writers Peter Allen and Carole Bayer Sager, it was a very quiet song, which made sense to me. It sounded like a lullaby.

“But Clive Davis, who was the president of Arista, thought it would be more successful as an anthem and it was. So I’m grateful for that.”

On one of her biggest hits, “Looking Through the Eyes of Love,” the New York native said, “It was a ‘gift’ from Marvin Hamlisch and Sager, who wrote the song, for me to perform for the movie ‘Ice Castles.’ The song was nominated for an Academy Award (best original song). It was one of two songs (the other was “The Promise”) that I sang on the Academy Awards show in 1980. It was thrilling.” 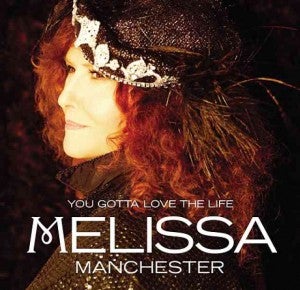 She took some time off in the ’80s. “I had left the industry for a while to raise my kids,” recounted the mother of two, Nathan, 26, and Hannah, 28. “One day, I was checking out at the grocery store. I was in line, my daughter was a baby and she was in the shopping cart seat. The cashier turned to me and said, ‘Oh, Melissa Manchester. Do you still sing?’

“You have to know how to shift that inner gear of humility and be able to say, ‘I do, indeed. All the time, every day.’ And not carry on in a ridiculous manner.”

Melissa grew up in the performing arts world. Her dad, David Manchester, was a bassoonist with the New York Metropolitan Opera (her mom, Ruth Manchester, was a pioneering woman in the clothing industry). “I was raised around Frank Sinatra, Tony Bennett, Judy Garland and orchestras,” Melissa recalled.

One of her big breaks came when she was hired as one of Bette Midler’s backup singers who came to be known as The Harlettes (Katey Sagal would later join the group). Barry Manilow was Bette’s musical director, while Toni Basil served as choreographer.

“The thing about Barry and Bette was that they always had huge visions for themselves,” Melissa pointed out. “They may not have articulated it that way but you could just see it. For me, I just had a sense of the kind of life I wanted, which was special. Well, special doesn’t mean too much if you don’t know what the specifics are (laughs), but I learned.”

“I didn’t have a mentor,” added Melissa, who also acted on TV and films, including a recurring role in the series, “Blossom.” “I had managers but they weren’t mentors. They did the best that they could. But I had fascinating friends along the way. I did study (songwriting at NYU) with Paul Simon when I was 17.”

Now, she’s an adjunct professor herself at USC music school’s contemporary music division and popular music program. “I teach at their newest division, which is pop,” she said. She prefers to call her class, which she conducts on a one-on-one basis, “The Art of Conversational Singing.”

“What I tell my students is that, if you want to do this for a long time, we need to have a discussion. This is too hard a walk and you have to recommit all the time, every day. You have to hope that the person who is signing you to a contract really loves your work and really cares about you.”

She cited a quote by her former classmate, Paul Simon. “When I was studying with Paul, he said this very concise bit of wisdom: ‘All of the stories have been told. It’s the way you tell your story that is the stamp of authenticity.’ That’s true.

“How I build on that with my students is that just because you write the song doesn’t mean you know everything about it. If you’re lucky enough to have a long career, the song will deepen and widen as your life experience deepens and widens.”

The artist, whose songs have been recorded by a diverse roster of singers, from Barbra Streisand to Alison Krauss, rhapsodized about the fulfilling aspect of teaching. “It is really gratifying to be at the beginning of an artist’s journey and to see how empty their brains are of expectations and experience,” she said.

“They have a wish—it doesn’t have a form yet, even though they’re watching ‘American Idol.’ The wish doesn’t have a form yet because they haven’t walked it. They’ve only started to play in clubs. So it’s gratifying to get a sense of their wish, to hear what they’ve been doing and for me to be that ancient elder.”

“It’s beautiful,” continued the performer who starred in musicals, including Andrew Lloyd Weber’s “Song and Dance” and “Music of the Night.” “And I know they can’t imagine what 45 years into their life is going to look like. But I can remember exactly what it felt like to be 17 or 19 at the beginning.”

While her students are “pretty committed,” Melissa cited that “they just can’t imagine what a long-distance journey this is. And what it means and what it takes internally to keep shifting the emotional and spiritual gears so that you can manage the changes in your life.

“For me, in my giving, in teaching, my world has opened up because of what I’ve received. It’s amazing.” She’s referring to the fact that her latest album was financed through crowdfunding, as initiated by her students, led by Barry Harris, who also helped improve her presence in social media.

She noted the difference in this generation. They don’t know the recording company system, at all, she pointed out. Crowdfunding is more the norm. “It is the democracy of music on a certain level. Anyone with a flashlight and a microphone can show up on YouTube. You can have a big career and never be played on the radio.”

Here’s what Melissa would do differently if she had a chance to start her music career all over again: “I would slow my brain down. Quite literally. When you’re a young artist and the world is coming at you—offers, accolades or despair, even energy—you are so young in your life experience that it’s very hard to slow your brain down enough. Because you don’t have enough experience under your belt to discern what you’re going to do with all this information.

“This is part of what I try to teach my students—breathe and slow your brain down so that you can make better-informed decisions with your manager, publisher, agent and lawyer. You can make more connected, conscious decisions about the direction of your career and the art that you choose.”

Listening to her spirited reflection about her life and career made us suggest that she should write her memoir. “Yes, I feel a memoir in me,” agreed Melissa, who turned 64 last month. “I’m not sure what form it will take.”

We asked what she considers the highlights of her career so far. She replied, “When I got a chance to play in ‘Sweeney Todd.’ It was the musical’s 25th anniversary. Mr. (Stephen) Sondheim came to that performance. I got a chance to sing some music that had been omitted from the Broadway version, so that was thrilling.

“Working with Ella Fitzgerald and doing a Memorex commercial with her a very long time ago was also very thrilling.

“The night I won a Grammy and I met the diva Leontyne Price. She changed my life. As I approached her to be introduced to her, she extended her hand and said, ‘Diva.’ So that was a good moment (laughs).”

She saved the major highlight for last: “Just to have been able to live this life. It’s a very large experience to have a life where you can use your art to reflect your life and to have your songs help people to reflect theirs. It’s unbelievable. That’s really the big one.”