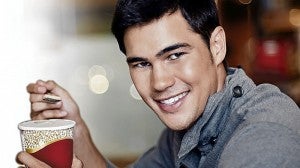 Even though he’s being linked to actress Angel Locsin, football player Phil Younghusband would rather steer clear of all things show-bizzy.

Asked about the state of their relationship, Phil was both careful and candid. “The status is still the same. We’re happy at the moment,” he told the Inquirer at his launch as Häagen-Dazs endorser, along with model Georgina Wilson.

Phil admitted that he had gone on a date with Angel at an outlet of the ice cream store. “I gave her a fondue set. Vanilla is my favorite, while Angel likes all the flavors. She’s more experimental than I am. I think we complement each other.”

When Angel visited the Inquirer office as part of her immersion for a new Star Cinema movie, she confirmed that Phil had gifted her with the Häagen-Dazs fondue. “But I had to pass it on to my dad. I’m on a diet.”

When Phil’s mom passed away, Angel was on hand to support him during the wake. Phil said: “I miss everything about my mother. I really feel sad…”

If Angel were an ice cream flavor, what would she be?

“Angel would be everything,” he quipped. “She’s very beautiful. She’s kind. Very human and accommodating. She’s one of the sweetest people I’ve ever met.”

Still, he’s reluctant to costar in a rom-com with her because he’s a footballer first, and an actor a distant second.

“My role right now is to represent the country well in the sport that I love,” he explained.

He only agreed to do a cameo in Jim Libiran’s film “Happyland” because “it promotes football. It showed the benefits of football and how it can change the lives of street children.”

Phil himself has set up the Phil Younghusband Football Academy to popularize the sport. “Our goal is to raise awareness and promote interest in football. We want to share with kids the discipline and values they can derive in team sports. After all, kids are the future of the sport.”

Although there has been talk that mainstream studios are offering movie deals to the Azkals, Phil is unequivocal in his stand.

“Football is my priority. If the movie promotes my ideals and goals, then I’ll do it. But if it has nothing to do with football, then I won’t. I don’t want to embarrass myself by heading toward a totally different direction,” he said.

So there’s absolutely no chance of doing a movie with Angel in the future?

“No love stories, unless it’s about football,” he stressed.

A musical or a repeat of “Celebrity Duets” would be a no-no as well?

“I did ‘Celebrity Duets’ for fun. I competed in that show as a football player and I had an enjoyable time. But I won’t be joining anything like it again soon,” he declared.