“She takes care of us and is part of the family,” Cotillard said of the woman whom she hesitates to describe as a nanny.

“She always talks about the Philippines. This trip is special because of her,” said the actress and environment activist who joined French President François Hollande on a two-day visit to the country to push for global action against climate change. 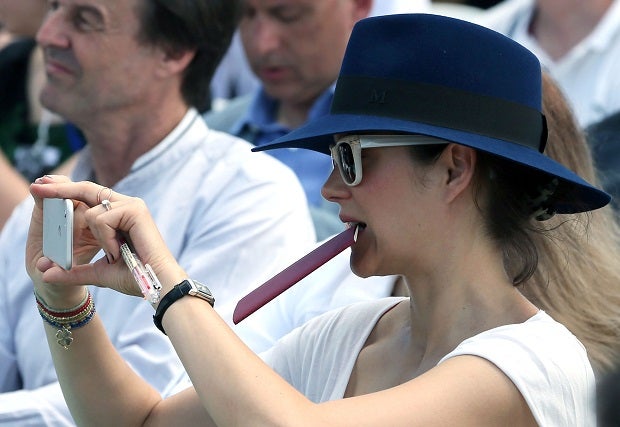 French actress Marion Cotillard takes photos of French President Francois Hollande during his tour of the typhoon-ravaged Guiuan township, in Eastern Samar province on Friday, Feb. 27, 2015. Press attaché Camille Conde of the French embassy in Manila said Laurent “seemed very happy” as she took photos of the people and the town itself. AP

She wasn’t certain which province Elma comes from, only that her home was “40 kilometers away from Manila,” the French actress said of the woman working in her household these past two years.

In an interview on the sidelines of her visit to Guiuan, Eastern Samar, one of the areas hardest hit by Supertyphoon “Yolanda” (international name: Haiyan) in 2013, Cotillard spoke as well about the resilience and “positive energy” of the people she met.

“What struck me was the people’s very positive energy. Filipinos are not victims; you are survivors,” said the actress.

This positive attitude is important, she added, because “it is the first step to action.”

Cotillard and French actress Melanie Laurent are part of a French delegation who met with President Aquino and other officials on Thursday to drum up support for actions that would mitigate global warming in preparation for France’s hosting of the United Nations Climate Change Conference in Paris in December.

The summit on Dec. 7 to 8 in 2015 was expected to draw up a legally binding and universal agreement to reduce the world’s greenhouse gas emissions to head off the worst impact of climate change, ranging from fiercer storms to rising seas, extreme rainfall and drought.

“What is needed is global action. We are not able to decide how to stop the mess,” Cotillard said. “We need laws, something that will force people and governments to be active against climate change,” she added.

“It is a fact,” Cotillard said. “Scientists have said that human beings are responsible for climate change.” 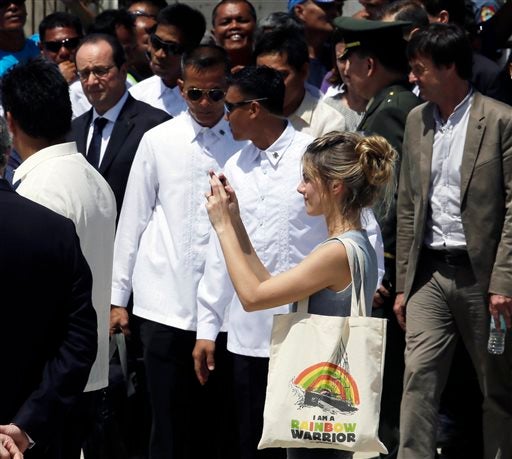 Because of this, she remains optimistic, the actress said. “Human beings are intelligent. We need to use this intelligence to find ways so we can live together and share the world’s amazing treasures.”

Cotillard, whose role as Edith Piaf in “La Vie en Rose” won her an Oscar for best actress in 2008, said that (since the) whole world was “directly responsible” for what happened in Guiuan and the rest of the Visayas, “international help should (also) be underway.”

“I am proud of my country for… its willingness to help anyone who wants to make a difference,” she said of Hollande’s announcement that France was pledging 50 million euros to help the Philippines prevent weather-related disasters similar to Yolanda.

“I am glad France is a part of this … that my country supports people who want to make a difference in this world,” the actress said.

Cotillard and Laurent met with fisherfolk in Guiuan on Friday, according to press attaché Camille Conde of the French embassy in Manila.

“They walked from the market to the school and interacted with the locals. They shook hands and had short conversations (with the townfolk). They also took lots of photographs,” Conde said, adding that Laurent “seemed very happy” as she took photos of the people and the town itself.

The locals warmly received their French guests, the embassy official added, “and they seemed excited even though they didn’t exactly know who their guests were.”

This was her first visit to the Philippines, but not her last, Cotillard assured the locals.

“I would love to come back … to see the beaches,” she said, adding that she felt compelled to visit the Philippines after hearing wonderful things about the country from friends.

“Whenever I ask people who travel a lot about beautiful places I could visit, most of them would mention the Philippines,” she said.

But she also visited the country to shed light on her environment campaign, Cotillard said. “That is why I am here. It is good that your leaders are aware of the issue of climate change.” 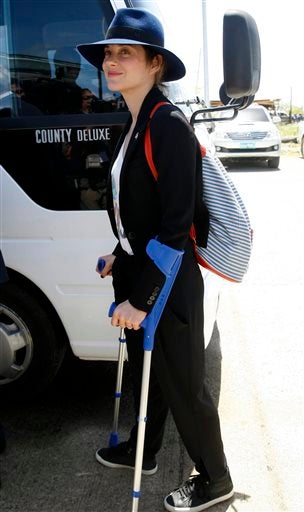 The actress said she heard a moving speech delivered by Albay Gov. Joey Salceda on Thursday night. “It was a very passionate, beautiful speech that inspired us to make a stand.”

Gilles Garachon, French ambassador to the Philippines, said Cotillard and Laurent were “charmed” by Samar, and that Cotillard had tried Filipino food, singling out mangoes as her favorite.

Though she only managed to talk briefly with the people of Samar, the actress said she gave them “the thumbs-up for what they have been doing. They want to try eco-tourism. All these ideas are important and need to be supported by the international community.”

Wearing a plain shirt and jeans topped with a hat, Cotillard drew a lot of attention from the French community at a meet and greet event at the European International School in Parañaque City, and not only because she hobbled along in crutches. She dismissed questions about why she was using crutches, but remained gracious and accommodating of requests to have souvenir snapshots with French and Filipino fans.

The 39-year-old actress is known for her roles in “Inception,” “A Very Long Engagement,” “Nine,” “Rust and Bone,” “The Immigrant,” and “Two Days, One Night,” for which she was nominated for best actress in the Oscar derby this month.