Brillante Mendoza on PH indies: We need own identity 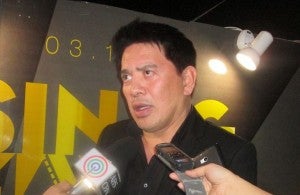 MANILA, Philippines—“We have to create our own identity.”

This was what internationally renowned Filipino director Brillante Mendoza said when asked about what it takes for independent films to be world-class and globally successful.

“We should be story-driven. I think this will make us unique in a way,” Mendoza said in Filipino. “We focus more on the content than the form. That’s what makes the international audience interested with what we are doing or showing.”

Mendoza also took a swipe at those who hit local films that portray poverty. He said poverty should not be the focus of discussions and urged the audience to “see the bigger picture” in terms of filmmaking and storytelling.

The festival puts on spotlight five full-length films that feature uncharted and colorful stories that are distinctly Filipino. They also touch on sensitive societal issues hoping to educate and inspire viewers.

Another special thing about the films, according to Mendoza, is the regional culture and experience meshed into the stories. Three of the films were shot in Cebuano, Ilocano, and Kapampangan languages.

“The films we have chosen … do not focus only on Manila … (they use) different languages from different parts of our country and they become educational in a way,” said Mendoza. “It’s not just entertainment.”

Aside from the screenings in Manila, the entries will have premieres in the provinces where they were filmed. The proponents also plan to show the films in other regions as well after the festival.

Mendoza said one of festival’s objectives is to distribute the movies internationally. He said he hopes to tap into the global indie market and expose the films to a wide range of audiences.

“International distribution meaning the films will be shown in other countries continuously. If you supply them with Filipino films every year, magkakaroon tayo ng exposure ng Filipino films all over the world,” he said.

Sinag Maynila has given a P2-million grant to each filmmaker, but its role doesn’t end there. Mendoza and Tieng have worked closely with the directors in all stages of production.

“Gusto ko magkaroon ng extension ang commitment nila sa pelikula, kasi by doing this lumalawak at nakakatulong sila sa pag-build ng audience (I want them to extend their commitment to the film, because by doing so, they are able to build and expand their audiences),” Mendoza said.

The films are scheduled for screening from March 18 to 24 in selected SM Cinemas all over the metro.