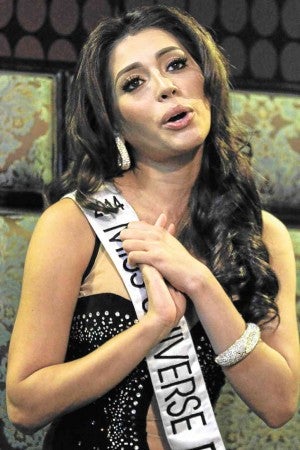 MJ LASTIMOSA: “I dwell on good memories of the pageant.” photo by LEO M. SABANGAN II

“No! Let’s stop this. This will never be the answer to any dilemma,” the 27-year-old North Cotabato native told reporters shortly after her arrival on Jan. 29. “It will solve nothing.”

Lastimosa told the Inquirer in an earlier interview that she witnessed war growing up. “We’d have a bag on standby filled with clothes, noodles, water and canned goods, so we could evacuate anytime,” she said.

The beauty queen said she learned about the incident only upon her arrival. “I pray for the families [of the SAF 44]. I know what it’s like; the experience maims you. Last month, we lost a head of the family,” she said, referring to the uncle-guardian to whom she was entrusted when her parents moved to Saudi Arabia.

Lastimosa said she was disappointed that, failing to make it to the Miss Universe Top 5, she did not get to share her experiences as a child of war. The delegates in the final cut were the only ones asked questions in the tilt’s last round.

“I was itching to answer the questions thrown at them!” she exclaimed. But, she clarified, “I have no complaints, no regrets. I just dwell on good memories from the pageant. I was very happy when I was on stage. I couldn’t believe it was real.”

Lastimosa joined the Binibining Pilipinas pageant three times before finally securing the right to represent the country in the Miss Universe pageant.

She related, “After [Bb. Pilipinas] 2013, I told myself ‘I will never get the chance to go on that stage.’ But the age limit was raised, and I got another opportunity to chase my dream.”

The beauty queen dismissed accusations that her gown had cost her the crown.

She recounted: “Everything happened so fast; the judges had no more than a glimpse of us. You couldn’t tell if they fully appreciated our performance. Perhaps some of them didn’t get to change their scores because everything was computerized.”

Many factors came into play, she said. “How can I say it was the gown, or my performance, or just me? Maybe it wasn’t meant for me. But that was a positive experience and I’m very happy.”

After the competitions, netizens and observers took to social media to lambast Colombian designer Alfredo Barraza, who made Lastimosa’s white frock.

Lastimosa said there were scenes during coronation night that weren’t shown on TV. For instance, the delegates split in two after the declaration of Colombia’s Paulina Vega as winner. A large group sought out fourth runner-up Kaci Fennell of Jamaica; the others rushed to congratulate Vega.

“Maybe we were just really happy for [Fennell]. Majority of us girls were rooting for Jamaica,” Lastimosa said, unable to verify reports that Vega made few friends in the competition.

Meanwhile, she said she might try show business after relinquishing her national title.

“I would love to take hosting jobs, in talk shows that are light and positive,” she said.

If she does pursue acting, she would not mind being teamed up with either Jericho Rosales or Derek Ramsay. These two stars act “from the heart,” she said.

Lastimosa dismissed insinuations that she plans to pursue a political career. She elaborated, “There are a lot of charity organizations that I can help. I don’t need to be a politician to do that. In the United States, I met the president of Stop the Hunger, who told me they now have a base of operations in the Philippines. I told him I was more than willing to help. I will continue my work with Operation Smile and I will still be here for the Hero Foundation.”

The 2014 batch of Bb. Pilipinas winners, including Lastimosa, will relinquish their titles at the 2015 Bb. Pilipinas coronation night on March 15.