Diana Krall doesn’t need to pick a fight with other celebrities or wear outrageous costumes to drum up interest in her recordings.

With the release of her 12th studio album, “Wallflower,” last week, Elvis Costello’s real-life muse demonstrated the potency of her hit-making cachet when her “defiantly pop” but jazz-tinged collection debuted at No. 1—the only artist to have nine albums bow at the top of the Billboard Jazz Albums chart! 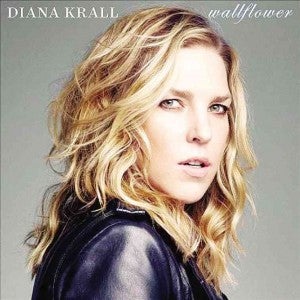 The gorgeous set isn’t just for avid followers of the jazz genre—in fact, it is Krall’s most accessible album to date! As she revisits songs from her childhood, the 50-year-old chanteuse puts her smoky contralto to good use, breathing jazzy life into a priceless repertoire of ’60s and ’70s soft-rock ballads and pop favorites.

You won’t be able to resist the understated allure and sassy sophistication of the songstress’ covers of The Eagles’ “I Can’t Tell You Why” and “Desperado,” the dreamy appeal of The Mamas & The Papas’ “California Dreamin’,” 10cc’s bittersweet “I’m Not In Love” and the lyrical provocation of Crowded House’s “Don’t Dream It’s Over” as she sings about war and waste.

Other standout tracks: The solemn sophistication of Paul McCartney’s “If I Take You Home Tonight,” ironically a leftover from the ex-Beatle’s recent album, “Kisses on the Bottom.” And Gilbert O’Sullivan’s beautifully somber “Alone Again (Naturally),” sung with riveting earnestness with guest vocalist, Michael Bublé.

If you crave for something more upbeat, the album’s deluxe edition offers an uplifting treat by way of “Yeh Yeh,” Krall’s rollicking duet with its original interpreter, Georgie Fame.

Krall’s easygoing approach isn’t always effective (it renders Bob Dylan’s “Wallflower” static)—but, for the most part, her heartfelt renditions will keep you warm through the Valentine season’s cool and “wintry” nights!