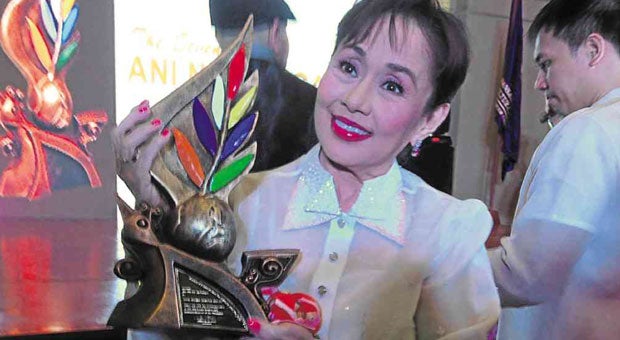 AS AN actress, Vilma Santos is proud to receive this award “from a commission created to promote the arts.”

“Our children benefit from new technology. They should really take advantage of this,” said Batangas Gov. Vilma Santos of the newly restored Danny Zialcita film “T-Bird at Ako,” which features her and Nora Aunor as lead stars.

At the recent 2015 Ani ng Dangal ceremony where she was one of the awardees, Santos pointed out, “Films mirror life. Filipinos should find time to watch these restored films.”

ABS-CBN Film Archives head Leo Katigbak was also a recipient of the Ani award given annually by the National Commission for Culture and the Arts.

Ani ng Dangal recognizes and celebrates Filipino talents who have been honored internationally. Awards were given to key personalities in visual arts, music, literary arts, dance, broadcast arts and cinema.

“I’m honored to have received this (Sarimanok trophy) and to have stood alongside other awardees whom I think deserve the honor more than I do,” Santos told reporters shortly after the awards show at the National Museum on Thursday. “This is special in the sense that it was handed out, not by some award-giving body, but by a commission created to promote the arts.”

Santos was cited for awards she received on account of her performance in the Jeffrey Jeturian film “Ekstra (The Bit Player),” released in 2013.

“The movie teaches a valuable lesson—that we should not look down on bit players. They are an important part of the movie-making process. We cannot finish a movie without them,” she pointed out.

Santos said she hoped to finish her next movie with ABS-CBN contract artist Angel Locsin before the year ends. “Too bad this will not be ready for Mother’s Day. I’ve read the script and found it very interesting. It is light and enjoyable,” she told the Inquirer.

The Star Cinema movie was supposed to feature her son Luis Manzano, too, but the actor-TV host opted to bow out of the project. “I understood and respected his decision,” Santos related. “He said he didn’t want to work with both his mom and girlfriend in one film.”