Doy recalls: “Joey, Don, Manny and Evelyn ‘Benggot’ Pe Benito took the same class when we first offered Communication courses—they all worked in television eventually. In that batch, we had cross-enrollees from St. Paul College, Manila—who included Charo, who sat in the front row with other Paulinians. She was prim and proper, wore glasses, was quiet but intelligent. She got an ‘A’. 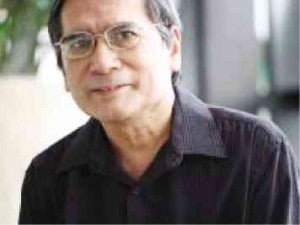 “At the end of the term, she handed me a note, thanking me for the class. Sabi ni Joey in jest, ‘If we knew she’d one day become the president of ABS-CBN, we would have befriended her (laughs)!’”

Back in 1994, I was with broadcast journalist Chi Datu, together with actress Mylene Dizon and future Cinemalaya directors, Coreen Jimenez, Joel Ruiz and Mario Cornejo, in Doy’s scriptwriting class.

According to Communication department chair Gary Mariano, “The alumni are ‘coming home’ for the first DLSU Communication Conference on Feb. 27. They will share what they’ve learned with students.”