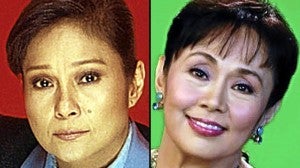 Gilbert Mejia, professor: “The much-awaited movie featuring Nora Aunor and Vilma Santos together may not push through, after all—but, their followers have something to look forward to: Danny Zialcita’s ‘T-Bird at Ako,’ which has been restored by ABS-CBN, will be shown again this month.

“This is young moviegoers’ chance to see the acclaimed actresses at their glorious prime—a rare opportunity to see for themselves why they’re still among the country’s top actresses!”

Juliet Penaflor, televiewer: “In ‘Forevermore,’ everything is smooth-sailing until the lola (Marissa Delgado) starts her litany in English. Why doesn’t she deliver her lines in Filipino, instead? She looks the part but struggles with her English lines. The same is true with Zoren Legaspi, who portrays Enrique Gil’s father. Beverly Salviejo fares better.”

Nydia Santos, housewife: “Some stars shine brighter when they transfer to another TV network. A case in point is Toni Gonzaga. She was just one of ‘Eat Bulaga’s’ many hosts. But, look at her now—she’s all over ABS-CBN, as an actress, singer and host. Iza Calzado did the same thing, but nothing much has changed as far as her popularity is concerned.

“Being an Ogie Alcasid fan, I was surprised when the singer-comedian left GMA 7. The decision was unwise because his shows on TV5 aren’t doing well. Now, it’s Kyla’s turn to jump ship. Here’s hoping that the move will do wonders for her career.”

Gilda Brigola, teacher: “It’s a constant source of irritation when teleserye actors don’t pay attention to the correct pronunciation of Filipino words, like baka. Actors, take note: if the accent is on the second syllable, it means maybe—on the first syllable, it means cow!”