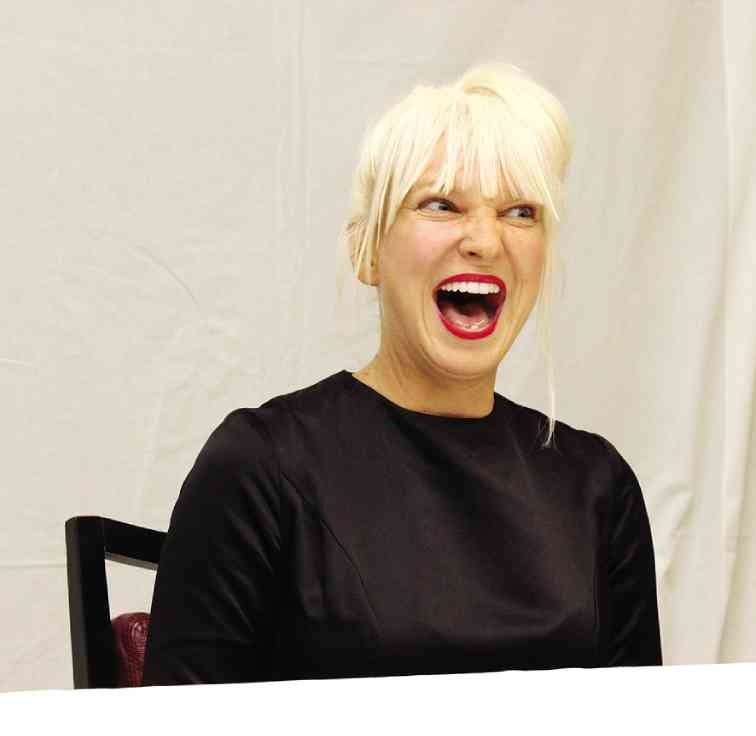 SIA. Grateful that she has been sober for over three years. RUBEN V. NEPALES

LOS ANGELES—Sia did not turn her back on us. The singer-songwriter known for hiding her face from the cameras, which she did in the recent Grammy Awards, faced us. Dressed in black, the Aussie performer was warm, funny and friendly, often breaking into laughter.

“The reason I’m facing everyone today is because I am here as the songwriter, not the artist Sia,” explained the mysterious artist who had four Grammy nominations this year, including record and song of the year for her smash single, “Chandelier.”

Sia, who turned 39 last December, quipped to the assembled journalists, “Botox, babies, botox. This face is filled with stuff.”

In her Grammy performance of “Chandelier,” Sia looked squarely at a back wall as Kristen Wiig and 12-year-old Maddie Ziegler, the “Dance Moms” star who appeared in the song’s video, did an interpretive dance in blonde bob wigs and nude leotards.

Shia LaBeouf, who was in Sia’s “Elastic Heart” video, introduced the singer-composer with an ode that read, in part, “If strength were made of broken pieces, you and I would always win. Punch me if I stop crying.”

Sia, who suffered from depression, released her first album in 1997 but marked her breakthrough last year with the album, “1000 Forms of Fear,” which features “Chandelier” and “Elastic Heart.” She had originally thought of sending “Chandelier” to Rihanna who had earlier recorded her “Diamonds.” Other singers who recorded Sia’s compositions include Beyoncé, Ne-Yo, Katy Perry, Britney Spears, Celine Dion and Christina Aguilera.

The prolific composer also sang on some of the hits that she wrote for others, including “Titanium” (David Guetta), “Wild Ones” (Flo Rida) and “Beautiful Pain” (Eminem).

At one point, when she was becoming famous but unhappy in her personal life, Sia considered quitting performing to concentrate on being a songwriter. Sia’s desire for privacy led her to rarely show her face, which she sometimes covers by putting a paper bag over her head.

“It was less about insecurity and more about just a desire for privacy,” Sia explained. “I thought that if I was less photographed or if I did less facing toward the camera, it would be smart for me, my serenity and private life. It was interesting because that became the brand. So, I figured I would make the blonde bob the brand. And that did become the brand. Suddenly, I could put a celebrity or Maddie Ziegler, the little girl from the ‘Chandelier’ video.

“I realized that I created this genius way for me to be able to either direct the video or the live performances. I could be more involved creatively, as opposed to the sales part, which is trickier for me.”

Considering her past struggles with fame, Sia’s comment about being ranked number three on the list of Australian music industry’s most powerful figures was not surprising.

“Who makes those rules?” she asked aloud. “Who decides who is the most powerful? It’s so subjective. My manager sent that to me and was like, ‘Look at that!’ You get five minutes of your ego feeling good and your self-esteem being, woo hoo! Then, your dog poops on the carpet, and you’re back to real life.”

The artist, whose unusual name came from her mother’s love of Greek mythology (“Sia was at the end of a lot of names like Dionysia and Anastasia”), gave away the four Aria (Australian Recording Industry Association) Music Awards trophies she won last November, including album of the year, for “1000 Forms of Fear.” She tweeted that the first four of her fans to document a good deed would be sent an Aria trophy.

“I’m way better now,” declared Sia who is grateful that she has been sober for over three years. “I was into alcohol and drugs. I was a pill-popper.” Bogged down by depression, Sia once contemplated suicide and even wrote a suicide note.

“I don’t think you know you’re an alcoholic or a drug addict until you know,” she said. “Or, if you do know, you’re not really willing to get clean and sober until you have hit the bottom that is necessary for you to turn it around. There was a small voice (in me) that wanted to live and was like, ‘You can do it.’

She’s happy in her personal life, as well. “Married life is awesome,” said Sia who married documentary director Erik Anders Lang in August last year. “I married a good one.”

Sia splits her time between LA and New York. She grew up in Adelaide, where she was born with the full name, Sia Kate Isobelle Furler. “When I was 21, I went to London and lived there for eight years,” she shared.

This talented Australian disclosed her next big step. “I’m writing a screenplay,” she announced. “I am planning to direct it with my friend, Daniel Askill, who I made ‘Chandelier’ with. It’s about a sober drug dealer and his autistic sister.

“Simultaneously, I have a couple of albums that are pretty much done,” Sia added. “One is an orchestral album for the soundtrack of a film. The other one is a pop album. I’m also working on an animation film for kids, and I am doing some music for that.”