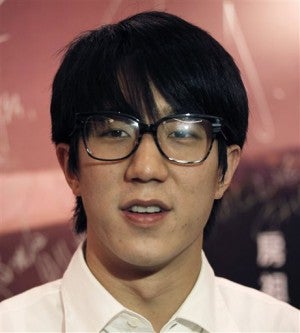 In this June 14, 2010 file photo Hong Kong actor Jaycee Chan attends a premiere of his new film “Break Up Club” in Hong Kong. The son of actor Jackie Chan has been released from a Beijing jail after completing a six-month sentence for allowing people to use marijuana in his apartment, amid a crackdown on illegal narcotics in the Chinese capital. AP

BEIJING, China–The son of kung fu star Jackie Chan was released from a Chinese jail on Friday after serving a six-month term for drugs offenses, his agency said.

Jaycee Chan, who like his father has worked as an actor and singer, was detained in August and charged with providing a venue for others to use drugs after police found 100 grams (3.5 ounces) of marijuana at his home in Beijing.

He had already spent five months in prison when he was sentenced in January after pleading guilty to the crime.

The 32-year-old was set free from a prison in the Chinese capital early Friday morning, his management M’Stones International said in a statement.

Chan and the company will hold a press conference on Saturday at which the star will “formally apologize and explain to the public”, it added.

At least 10 locally-known stars were detained on drug-related charges last year, according to state-run media.

Experts say the arrests are part of a wider campaign by Beijing to promote morality. Chinese authorities have also targeted prostitution and the broader illegal drugs trade over the past year.

Jaycee Chan has featured in several films but not yet won the acclaim earned by his father, one of Asia’s best-known actors with a string of Hollywood hits to his name.

Read Next
Police: Hollywood heartthrob put woman in chokehold in Utah
EDITORS' PICK
Geek out at TOYCON 2022 powered by Smart Signature
High inflation: Your P1 is now worth only 87 centavos
High-risk pregnancy: Reducing your risk is in your hands
Unemployment rate up to 6% in May
House energy committee chair Arroyo bats for cheap electricity
Bye bye Boris: UK PM Johnson bows out with regrets but no apologies
MOST READ
Suspect in grisly killing of missing woman in Bulacan arrested
Kim Atienza’s daughter flaunts bikini body in response to critics of her ‘revealing photos’
Bongbong Marcos’ first order: Abolish PACC, Office of Cabinet Secretary
Ex-Defense chief Lorenzana is the new BCDA chair
Don't miss out on the latest news and information.