Eve Ensler, up close and personal 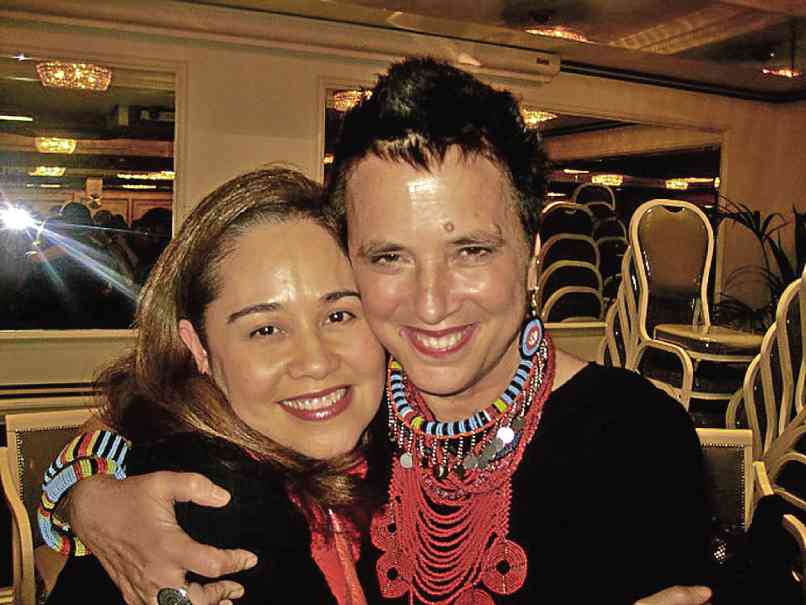 ENSLER AND WILSON. Lead artistic “uprisings” in more than 200 countries

Eve Ensler, author of the groundbreaking play, “The Vagina Monologues,” doesn’t mince words—whether she’s talking about rape, religion, her new play, “OPC (Obsessive Political Correctness),” the residents of Payatas and Tondo, or getting stuck in eight-hour traffic on her way to Matabungkay!

We saw this for ourself when we recently met her at New Voice with Monique Wilson.

We first crossed paths with Eve in 2002, when she joined 80 women for V-Day at the Folk Arts Theater—but, she went as fast as she came, and we didn’t have much time to “pick her thoughts,” about “TVM” and “The Good Body,” two of the stage producitons we directed for NVC.

For someone who’s familiar with many of her 11 plays, it was a thrill for us to see different shades of this enigmatic woman’s personality. She was gentle, affectionate, conscientious, playful (she improvised a monologue about a popular actress we talked about), and puts her money where her mouth is: “I was shocked to see the living conditions in Payatas, and I haven’t gotten it out of my head since—but, my trip to Tondo with Gabriela took it to a whole new level! I want to write something about the people who live in garbage sites—and I envision it as a dance musical.”

“TVM” and its ravishing and empowering monologues have since been performed by the likes of Jane Fonda, Glenn Close, Susan Sarandon, Idina Menzel and Oprah Winfrey—a far cry from its humble beginnings in the basement of a Greenwich Village café 19 years ago.

Did she see its phenomenal success coming? Eve answers, “No. The play began as a desire to talk about what was on my mind, and the hope that I wouldn’t be condemned for it. What its success shows is that people lead dichotomous lives: In one life, they do as they’re told and follow authority. In another, they’re desperate for liberation! What art does is give that second self the opportunity to express itself.”

How different are women’s issues in Asia from the rest of the world? Eve replies, “They’re universal. Most religions teach women from a young age that sex is sinful. So, we grow up believing that there’s something inherently wrong and shameful about it—when, in fact, sex is this incredible life force pulsing through us all!”

Does she have a favorite monologue? She quips, “I don’t love one more than the other. What I can say is, you can’t lie through the monologues—if you ‘act’ them out, you’ll fall flat on your face.”

How has global perception changed since she began staging the monologues in 1996? Eve shares, “I remember the first piece that CNN did about the play, which never mentioned the title. Back then, it was OK to say penis, but not vagina—but, times have changed.”

How has V-Day evolved into One Billion Rising? “OBR was created three years ago as a way to escalate V-Day’s 15-year advocacy against violence committed to women and girls. We saw artistic risings in 207 countries—so, the next stage is nothing short of a revolution, to take us where we need to go!”

Today, Eve and Monique, who is OBR’s global director, will join performers like Rosie O’Donnell, Thandie Newton and Kathy Najimy, at the Hammerstein Ballroom for New York’s artistic “uprising.”

Thereafter, Monique will fly home to lead Manila’s OBR event at the Bonifacio Shrine—on Valentine’s Day! She says, “This year, we’re calling for persistent change, because you can’t end violence against women if you don’t overhaul the flawed system!”

Eve adds, “There’s no way for women to be emancipated from violence, economic or otherwise, unless they’re earning wages that would allow them to support themselves and their children. Is OBR’s objective manageable? Yes. It may not be in my lifetime—but, we’ll get there!”