But Lilia Cuntapay, the so-called Queen of Philippine Horror movies, got the horror of her life and ended up injured on the face when a mentally-disturbed man struck her.

The incident took place Friday night but authorities only confirmed it Monday. 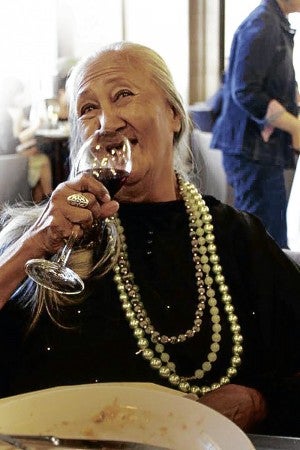 Based on the report released by the Tupi police, the 80-year-old Cuntapay was a guest during the foundation anniversary of the Gen. Paulino Santos Memorial Institute on Friday.

She was silently sitting beside the school stage while waiting for her turn to go up when a man, later identified as Aljay Sacramento, 29, arrived and without a word, struck her in the face.

Her blood pressure shot up, she said, adding that the actress had to be admitted at the hospital.

“As of now she is being secured by two policemen, her room is off-limits to visitors,” Tanzo told dxOM-FM in Koronadal City.

It was not immediately known if Cuntapay would file charges against the man but the suspect’s relatives have reportedly apologized to the actress for the incident.

Born on January 3, 1935, in Tuguegarao, Cuntapay taught in primary schools in Tuguegarao after earning her Bachelor of Science in Education degree.

After years of teaching, she quit and went to Manila and engaged in a buy-and-sell business. Later she became an office worker at the National Police Commission (Napolcom).

Cuntapay is known for her debut role in the Filipino horror film series, Shake Rattle and Roll.

She also starred in her first leading role, “Six Degrees of Separation from Lilia Cuntapay,” which won her the Best Actress trophy in the 2011 Cinema One Originals Digital Film Festival.

She was one of the 40 actors trained in the first batch of acting workshops for LVN Pictures. She played as nanny of the baby of now presidential sister Kris Aquino in the Shake Rattle and Roll series.

At age 56 and making her name in Philippine movies, Cuntapay retired from Napolcom in 1991 and starred in the film ‘Aswang.” In 2009, she appeared as a quack doctor in the ABS-CBN TV series “Precious Hearts Romances Presents: Bud Brothers.”

Cuntapay also starred and appeared in the following: “Kwintas ng Mangkukulam,” “Lokomoko High’s” spoof of the Party in the USA music video, “Midnight DJ,” “Nobody, Nobody But…Juan,” “The Last Prince,” “Wansapanatym,” and “Sa ngalan ng Ina.”

Cuntapay has an upcoming biopic, with actress Cecille Miller playing the young Lilia.

Who is Lilia Cuntapay?

Filipina ‘aswang’ a star in Busan