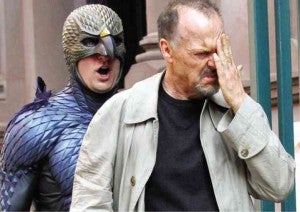 Among the uniquely connected qualities of Alejandro Gonzalez Iñarritu’s dark show biz comedy “Birdman or (The Unexpected Virtue of Ignorance)” are timeliness and timelessness. The film tackles the current state of the American entertainment industry, yet its relevance is assured for years, even decades, to come.

Wryly and unabashedly, “Birdman” analyzes the connectedness of art and fame, giving voices to perspectives that seem to be heard only on late-night talk shows, gossip sites, and in social media.

“Birdman” focuses on Riggan Thomson (Michael Keaton), best known for playing a comic book superhero but now—decades after leaving behind the blockbuster franchise—yearning to be recognized for his own talents.

He risks everything for a new Broadway play that seems destined to fail, owing to various misfortunes and conflicts plaguing it before a proper debut.

Penned by Iñarritu and three others, “Birdman” presents the merged realities of Riggan—in his mind, he can move objects telekinetically, and he occasionally hears the taunting voice of his long-abandoned big-screen alter ego, Birdman.

The inclusion of an acclaimed Broadway actor, Mike Shiner (Edward Norton) gives Riggan a set of challenges that keeps him on his toes and makes him a little crazier. He also has to keep an eye on his daughter and assistant Sam (Emma Stone), a recovering addict, while overseeing production of the play.

Another thing that makes “Birdman” intriguing is its parallels with, and close reflection to, Keaton’s career; he rarely appeared onscreen after his “Batman” movies—he reportedly spent those years as a single dad, raising his son. The absence in movies was made easier, he revealed in interviews, by “Batman” money.

The role looks tailor-knit for Keaton, just as Mike is perfect for Norton, who has a reputation for being difficult to work with. He is, however, incredibly funny as the brilliant but self-absorbed Mike, who has befuddling quirks that Riggan and Mike’s girlfriend/costar (Naomi Watts) can’t stand.

Its snappy script pointedly and playfully examines the fickleness of fame and its accoutrements—Riggan’s longing for evasive glory and fulfilment is seen differently by his daughter, who has a “realistic” take on what’s important. Keaton and Stone share a momentous, exhilarating exchange, their words cutting, hurtful—and, from our end, powerful.

Ultimately, the role gives Keaton plenty of layers to prove himself anew, and so he does in bombastic, affirming fashion. Riggan’s desire for the approval and validation of peers and strangers alike is felt many times over.

The unconventional storytelling gets important points across, some jarring shifts in “realities” notwithstanding. The bold, unflinching commentary on art and artistry also underscores the unseen process and drama of creation, especially co-creation, cathartically depicting one aging actor’s conscious and not-so-deliberate efforts to be seen apart from an industry heavily populated by dilettantes and entitled poseurs.

‘Boy Next Door’: Steamy but empty 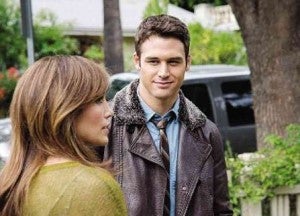 Jennifer Lopez and Ryan Guzman in “The Boy Next Door”: Often silly, but JLo and Guzman are stunning.

In the stalker thriller “The Boy Next Door,” pop star-actress Jennifer Lopez plays a heartbroken hot mom who is harassed by an obsessed, studly 19-year-old. That’s not far-fetched, but her character is also—brace yourselves—a high school English teacher.

That’s one of the snicker-worthy bits that the film, a predictably formulaic sex-stalker drama, offers. Sure, she’s not a stereotypically frumpy prof, but it really is hard to separate JLo from Claire Peterson, a somewhat awkward but sexy educator who talks about poets and Greek tragedies almost full-time.

Claire has a teen son, Kevin (Ian Nelson) with a philandering ex-hubby, Garrett (John Corbett). The parents share the kid, living separately but amicably, until an elderly neighbor’s sweet, charming nephew, Noah (Ryan Guzman), ingratiates himself into their lives.

Claire warms up to Noah easily; apart from helping out with house chores, he leaves his curtains open at night and generously gives her… things to look at. Claire gives in to the persuasive younger man’s sexual advances, resulting in a one-night stand that she later categorizes as a mistake.

It also becomes apparent, soon enough, that Noah is unstable and has rage issues. Shocker.

“The Boy Next Door” comes across as partly a toned-down version of Lopez’s schlocky 2002 marital abuse-revenge film “Enough,” and a contemporary mash-up of sexy stalker thrillers. It starts as cute, then gets steamy, then horrid, and finally, we just feel indifferent.

It’s often silly, but it has some things going for it, like JLo herself—she’s stunning in her mid-40s, looking almost like she did over a decade ago. But forget her acting, at least in this movie. She doesn’t pull off the sexy nerd look, either, but she’s eye candy.

“The Boy Next Door” doesn’t really get gripping, except when those two are together, the interest culminating at the toe-curling consummation part. After that, the hotness fizzles, and the weary crime clichés proceed like clockwork.