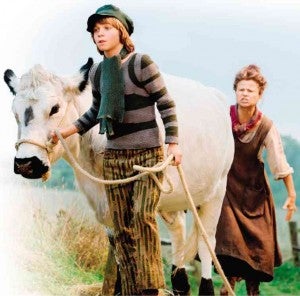 Daniel Huttlestone is well-adjusted and talented, says Ullman, his mom in “Into the Woods.”

LOS ANGELES—“I’m a broad. She’s a dame,” Tracey Ullman joked about the difference between her and Christine Baranski. Having both of the “Into the Woods” actresses together in an interview was a riot, as you should expect, especially when Cinderella’s Stepmother (Christine) and Jack’s Mother (Tracey) dished on the Witch (Meryl Streep).

In reality, the two women share several things in common. Tracey, the live wire of the two (she reminds us of the late Robin Williams who was like a one-man show at interviews), said, “(To Christine) You’re a good friend of Meryl’s. (To us) I am a good friend of Meryl’s. But I had never met Christine before (until ‘Into the Woods’). I wish I was on ‘Mamma Mia!’ (which starred Meryl and Christine) because what went on in that island…”

“Yes, we have a lot in common,” Christine chimed in. Tracey added, “Yeah, we’re both Polish girls—‘Polski’ girls (both of them have Polish heritage). And somebody called us veterans yesterday (laughs).” And they are both accomplished actresses, straddling stage, TV and film with ease and panache. While they’ve bagged various awards, the prizes that they both have won are the Emmys.

And both portray moms in Rob Marshall’s wonderful, inspired film adaptation of Stephen Sondheim and James Lapine’s beloved stage musical, “Into the Woods.” Tracey is mother to Jack (as in the boy who climbs a gigantic beanstalk), played by Daniel Huttlestone with the same winning charisma he exhibited as Gavroche in “Les Miserables.”

Christine is mom to Florinda (Tammy Blanchard) and Lucinda (Lucy Punch) and her stepdaughter, Cinderella (Anna Kendrick). Below are excerpts from our lively interview:

Can you talk about working with Meryl Streep?

Christine (C): Oh, where do we begin?

Tracey (T): You call her Smerlyn.

C: I call her Marilyn. She calls me Tina.

T: I love when we went to dinner with her one night (during the “Into the Woods” shoot) at her house. It was like the witches’ house. Meryl rented this house. I like that your driver was waiting in the driveway. I remember that driver saying, “I’m here with Christine Barashevsky.” (Laughs)

C: I think he called me Suzinsky.

T: I remember when she danced with the Bolshoi (laughs). Incredible. The driver got it totally wrong. So we were always calling you Christine Barashevsky or Brushinsky. “I worked for her for a long time, yeah.”

C: I’ve always heard that actors are so intimidated—“Working with Meryl was so…” I find her just one of the most accessible human beings. She’s so open and game. When she’s on the set, she’s just a colleague. She’s the great actress that she is and awesome at everything.

But on the set, she’s just your pal. She’s such a girlfriend. Whenever we could, we were always saying, “Come on, we got to go out for dinner together.” It’s just so much fun.

T: She’s a person as well as an actress. Some people are just actors. I’ve known her a long time. She is as wonderful as we all imagine. She cares about everything. And she just really loves the work. She makes everyone around her feel great. There’s no ego.

Who will replace her? Do we think anyone can? She’s a great girl. Her husband (Don Gummer) always calls her a girl—“Great girl, that Meryl.” (Laughs)

C: We have a lot in common. We have raised children and had long marriages (both the husbands of Tracey and Christine have passed away). When we’re together, we’re just girlfriends. 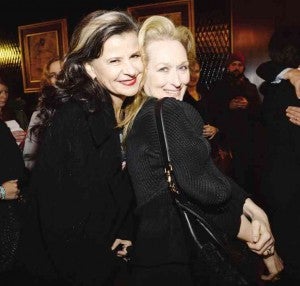 Ullman (left) claims she is one of very few people who can mimic good pal Meryl Streep. getty images

T: She’s got the best sense of humor and the best way of describing things…

Tracey, what was it like to work with a cow?

T: I love my cow. It was called Tug. Don’t eat cows! They’re lovely. They’re like dogs. Tug became like my pet. It was nudging me to keep scratching its ears. I really enjoyed my little team of my cow and my wonderful Daniel

(Huttlestone) as my son, Jack. I was very happy. I came home smelling of cow.

Can you talk about the challenge of singing Stephen Sondheim’s songs?

Like Shakespeare, it’s very challenging. You have to rise to the occasion. It really demands a lot of your talent and your theatrical intelligence to perform this material. When you pull it off, you feel really proud.

Do you remember some particularly fun tongue-twisting lyrics?

I don’t think you have to be an extraordinary singer to do Sondheim. Glynis Johns’ interpretation of “Send in the Clowns” is a real example of that. It’s an extension of the dialogue. You don’t just suddenly stop and we sing. The story goes on throughout. The bits I had to do were challenging. But I really enjoyed it. It was a privilege.

T: I loved him in “Les Mis.” They say, “Don’t work with children and animals.” But on day one, I got a cow, a child and a boy. I couldn’t be happier. Daniel is fabulous. We got on great. He’s like the coolest guy in the film. We all wanted to impress him. Emily (Blunt) was always like, “What does Daniel think of me?” (Laughs)

Daniel is such a talent that will go through to his adult life, if he wants to do this for a living. He’s so well-adjusted. When he sings “Giants in the Sky,” it kicks off the whole movie and the magic of it. The crew felt it. I adore him. And I don’t like other people’s kids. I only like my own. But I like him.

Your stepmom character resorts to desperate tactics to make sure Cinderella’s shoe fits the foot of one of her daughters. Do you love shoes? Are you like Imelda Marcos?

C: I do love shoes but I don’t have an enormous shoe collection. But my legs are my best feature so shoes are nice. It’s so funny about this cutting off of my character’s daughters’ toes in the movie. We’re so horrified. That’s so extreme.

Then recently, I read that women are having operations on their feet so they can fit into Jimmy Choo shoes which are notoriously narrow. It shows the crazed quality that the 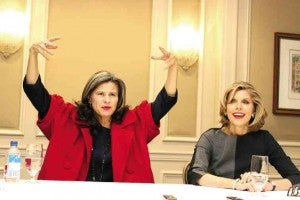 Tracey Ullman (left) and Christine Baranski. “We went to dinner at her house one night. It was like the witches’ house.” ruben v. nepales

stepmother and her girls have. They’re desperate to get into that world, marry that prince.

How do you both keep fit? Do you have a special regimen?

C: I do but it would be so boring to talk about it. If I never hear “Pilates” or “gluten” again, I will be a happy woman.

T: But she’s just genetically gifted. Look at her. She’s just this specimen.

T: I don’t have any hip or knee replacements yet but I know they’re available to me.