MJ Lastimosa says no to ‘all-out war’ in Mindanao 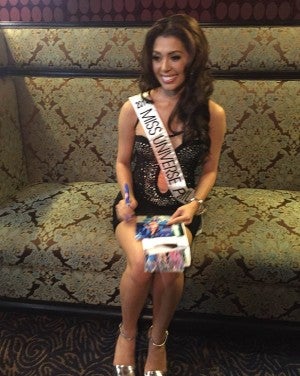 MANILA, Philippines—Fresh from her failed bid to win the Miss Universe 2014 crown, Binibining Pilipinas Universe 2014 Mary Jean “MJ” Lastimosa has thumbed down the prospect of launching an “all-out war” against antigovernment elements after 44 elite policemen were slain in a “misencounter” in Maguindanao.

Speaking in a homecoming press conference on Thursday, Lastimosa, a North Cotabato native, said there were other means to achieve peace in the region.

“No. It (all-out war) is not the answer. There are other means of achieving peace in Mindanao,” the beauty queen said.

She said she just knew of the incident upon arriving in the country on Thursday morning. The beauty queen condoled with the families of the slain policemen, adding she knew how it felt to have lost a family member recently.

The North Cotabato lass believed God would not abandon the bereaved families.

“I really believe that God has a plan and a purpose and hindi sila papabayaan (they will not be abandoned),” she added.

Last Sunday, 44 policemen from the Special Action Forces (SAF) of the Philippine National Police were killed in an encounter with Moro guerrillas. In an address to the nation on Wednesday, President Benigno Aquino III blamed SAF commander Chief Supt. Getulio Napeñas for not coordinating with the military, resulting in the botched operation.

SAF chief: I am responsible