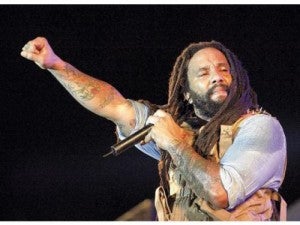 Ky-Mani Marley follows the footsteps of the great Bob Marley, father of reggae. A fitting tribute will be rendered during Malasimbo Music and Arts Fest, the island music festival slated for March 6-8, now on its fifth year at Puerto Galera. CONTRIBUTED PHOTONEW YORK CITY — Things are heating up for the upcoming Malasimbo Music and Arts Festival in Puerto Galera March 6 to 8, capped by a techno Dance and Lights Show following weekend March 13-15.

NEW YORK CITY — Things are heating up for the upcoming Malasimbo Music and Arts Festival in Puerto Galera March 6 to 8, capped by a techno Dance and Lights Show following weekend March 13-15.

The international lineup for the much-awaited events is expected to draw tourists from 30 countries to the island of Puerto Galera, Oriental Mindoro. The eco-development project for this year will benefit tamaraw preservation, an endangered species numbering only about 400 in Mindoro.

Now on its fifth year, D’Aboville Foundation is expanding the music fest to another weekend of techno dance, hip-hop and lights show designed to attract the younger enthusiasts and create an awareness for the tribal culture of Mangyans that Puerto Galera is famous for. The line up for this year’s gathering of musical talents and performing artists promises to deliver surreal, out-of-body experiences during the full moon nights.

Ky- Mani Marley, noted for his album, “Dear Dad” with lyrics taken from a letter Ky-Mani wrote as a child to his father, Bob Marley, after he died. His 2001 album, “Many More Roads,” was nominated for a Grammy for best reggae album. He lost to his brother Damian’s album, “Halfway Tree.”

Taylor McFerrin is an American DJ, music producer, keyboardist and beat boxer based in Brooklyn, New York. He is the oldest son of popular vocalist and classical conductor Bobby McFerrin. Fred Wesley and the New JBs will jazz it up a bit.

Aussie Tom Thum will use nothing but his human voice to mimic the earliest instrument of mankind, percussion. He creates incredible soundtracks of drum beats and jungle sounds with the help of his microphone. For a sample of his beatbox brilliance, catch his video on youtube TEDxSydney. Other foreign artists in the line up are French Kiwi Juice and Gocoo + Goro from Japan.

Leading the local performers, Noli Aurillo, an accomplished Pinoy guitarist with a Spanish flair, will pay tribute to OPM and a touch of classic rock. Also making a come back from their 2012 outstanding performance, Brigada will get you delirious with the non-stop beating of the drums. 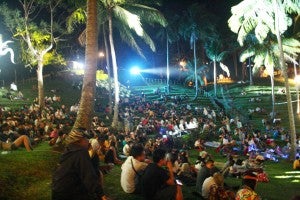 At the foot of Mount Malasimbo, D’Aboville Foundation developed a private property, boasting the most modern sound stage devoted to the annual festivities at Puerto Galera, Oriental Mindoro. Preparations are also under way for the first Malasimbo Dance and Lights Show on March 13-15, to be helmed by six Japanese DJs. CONTRIBUTED PHOTO

A band of young Filipino boys, Bleu Rascals, noted for their original blues just toured the US. They will join the festival for the first time with other artists Akasha, percussionists Adinkra Lumads Djembe Community and Crwn. Additional groups are signing up as the festival draws nearer.

D’Aboville Foundation’s first Malasimbo Dance and Lights Show will feature where six Japanese DJs to stage the biggest techno dance and lights show. DJs Kentaro, Mitsu The Beats, Hifana, Tetsuji Tanaka & To-Ru are sure to bring in their legions of young Japanese crowd to the island. Lyrically Deranged Poets, McCardz and Swindle will mix it up, with Manolet Dario, Mikail, Br3aking Silence and Emel Rowe.

For daytime activities, Malasimboat will partner with 2GO to ferry guests from neighboring cities of Bacolod, Iloilo, Cebu, Davao and Boracay.

For the first 100 guests without hotel reservations, camping grounds close to the festival are available at Php 500 per night, contact [email protected] .

A two-hour ferry ride from Batangas via Minolo Shipping, or for those bringing cars and campers on board, take the RORO or Fastcat ferries to Calapan, it connects to Puerto Galera by an hour scenic drive. For more information, check the website: http://malasimbo.com/transportation/