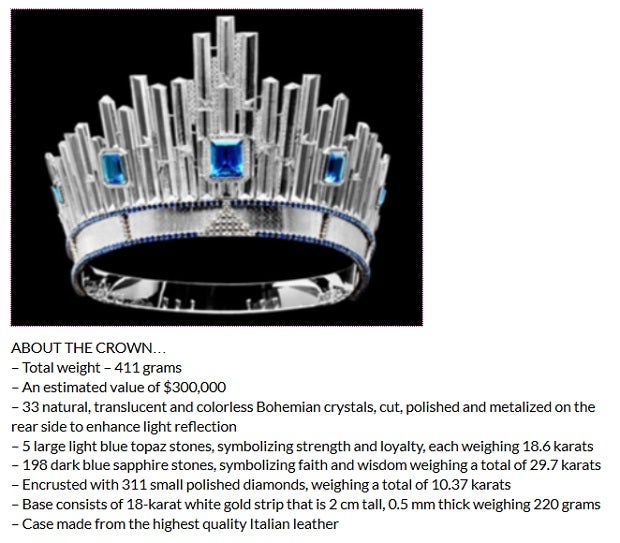 MANILA, Philippines–When Philippines bet Mary Jean Lastimosa wins the 63rd Miss Universe on Monday, she will have the chance to wear and own a new crown valued at $300,000 (P13.2 million).

The crown, which was unveiled to the public on Friday, was made by the Czech Republic-based Diamonds International Corp. (DIC). The crown’s design is said to incorporate the roots of the jewelry company and the New York City skyline, home of the Miss Universe Organization.

The new crown is adorned with 33 translucent Bohemian crystals, five light blue topazes (symbolizing faith and wisdom), 311 small diamonds, and a base of 18 karat white gold.

According to the Miss Universe Organization, the crown “symbolizes and expresses the beauty, stability, confidence and power of women around the world.”

3,000 hours of labor were reportedly put into making the unique crown.

The new crown replaced the “Peace” crown used by the pageant from 2009 to 2013 and will be the ninth crown used in the Miss Universe since 1952.

The crown used in the first edition of Miss Universe in 1952 was a crown which reportedly belonged to a Russian czar. The said priceless crown was encrusted with 1,529 diamonds. It was worn and modeled by the first Miss Universe Armi Kuusela from Finland.

DIC will be the maker of the new Miss Universe crown until 2024 after signing a 10-year contract with the Miss Universe Organization in August 2014.  AJH

MJ Lastimosa is ready to face the universe