From boyish to ‘bellissima’ | Inquirer Entertainment

From boyish to ‘bellissima’

Bela Padilla was once a tomboy—fashion-wise. “In high school (at Colegio de San Agustin), I would wear the same outfit for an entire week,” she recalled. Her “uniform” was loose tops, jeans and Chuck Taylors. “Very casual and boyish—that was my style,” she admitted. “I was not the type to wear sun block and cheek tint. I was the one running across the soccer field.” 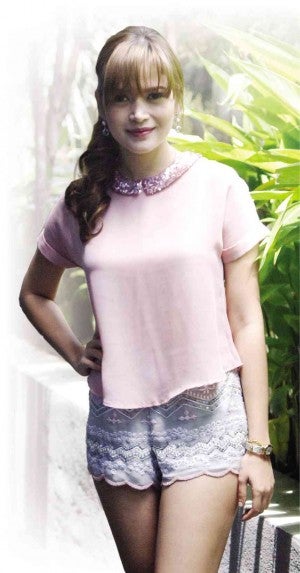 She dons girly outfits only for show biz commitments.

Then she wandered into the family trade, show biz, and began filling up her closet with dresses and skirts. She counseled other girls: “Be open-minded. It’s cool to dress up once in a while.”

Style icons? She looks up to Jennifer Aniston and Cameron Diaz among Hollywood stars; locally, she watches Anne Curtis and Solenn Heussaff.

She also admires French celebrities. “They look so unpretentious, a bit grungy but still sexy.” Another useful tip: “Choose age-appropriate clothes. Don’t wear sexy gowns when you’re only 17.” And for those on the wrong side of 40, avoid hot pants and tube tops. She added, “Look for ideas online.”

Bela plans to launch a smartphone application that will offer such tips, in fact. “I often post photos of my OOTDs (Outfit of the Day) on Instagram,” she said. The fashion app will go a step further. “Fans often ask where I got a certain top or skirt,” said Bela. “With the app, I can steer them in the right direction.” She promised to promote local labels and designers via her latest venture.

Although she is not an endorser of these local labels, she shops regularly at Bench, Kashieca, Penshoppe and a few other proudly Pinoy stores. “You don’t have to wear imported or branded outfits,” she said. “Local stores offer a wide range of options.”

She stresses the importance of knowing one’s body type. “I am not that confident about my upper body, so I look for styles that conceal it,” she said, “like haltered tops, to make my arms look thinner. Or rompers.”

The first thing she looks for in a store is a white top. “White button-down shirts are perfect for day events, but with a nice pair of slacks, you can wear it at night, too.” 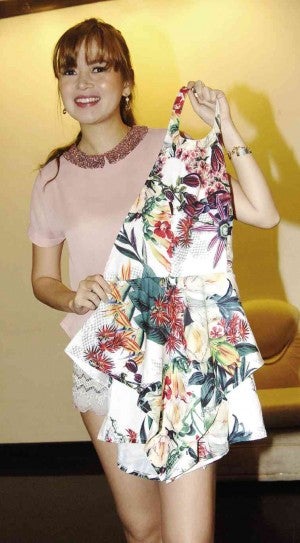 Occasionally, for foreign labels, she goes to Zara and Topshop.

She is proud of her long legs. “I pick clothes that show them off,” she said.

For this pictorial, she wore lacy shorts—not her usual get-up. On regular days, she is usually covered up, with palazzo pants or joggers.

She has an extensive collection of leather jackets, blazers and thick wool jackets. “I get cold easily,” she confessed.

When she traveled to Amsterdam to shoot the movie “10,000 Hours,” she had a blast shopping for winter gear. “I rented a bike, went around on my own,” she reported, “and bought some vintage stuff.”

She rued that the unpredictable Philippine weather makes dressing up a chore. “Sometimes I wear a jacket because it’s raining in the morning, but by lunchtime it’s a million degrees outside.”

She is partial to unique footwear. 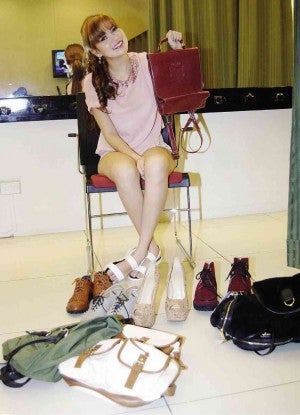 Most of Bela’s bags and shoes are not branded.

“I am always looking for good shoemakers, especially from Marikina, online,” she said. “It’s hard to find shoes that fit me.” (She is a size 7.) “Some European and American stores don’t carry my size, so I go to local vendors for custom-made pairs.”

A favorite is her pair of red creepers. “I have lots of these. They’re chunky, like loafers,” she said. Other faves are oxfords, mandals (“weird but comfy”) and boots (which keep her warm).

She is not that fond of stilettos and wears them only for red-carpet events. A fan gave her a pair of pricey Zanotti shoes.

She counts herself lucky to have found designers who work well with her. “Look for one who understands your body and your personality,” she said.

A constant collaborator is Banggo Niu. “I won awards in all his gowns,” Bela said. She wore Banggo originals at the Gawad Tanglaw, Famas and PMPC Star Awards.

Another lucky charm is designer Nat Manalag. “I wore a gold Nat Manalag when I won best story at the Metro Manila Film Festival (for “10,000 Hours” in 2013).” 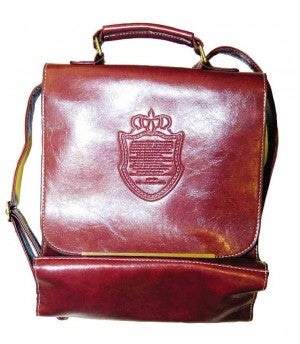 She got to bring home costumes from her old shows as souvenirs.

“Having read that Tobey Maguire was not allowed to keep his Spider-Man outfit, I started asking for some of my memorable costumes,” she said. From her GMA 7 mini-series “Sa Puso ni Dok,” she kept a lab gown; from the 2011 series “Machete,” an Ifugao dress.

From the 2012 soap “Magdalena,” she saved an outfit that she wore in a heavy drama scene. “It carries a lot of bad memories with it,” she jested.

She is not hooked on designer bags. “I’m Ilokano,” said Bela, “and thrifty. I feel guilty spending money on a bag that would feed a family for a whole month.” Not that she would turn down a gift from her mom or boyfriend. “A nice purse or tote can complete an outfit.”

Most of her bags are hardly backpacks. “I still get away with bags that are not branded,” she said. “When I get older, maybe I’ll invest in luxury pieces.”

Bela is fascinated with elephants. “I watch a lot of elephant videos,” she said. “They look so smart and gentle.”

Her dad, who is British, lives in Bangkok, where elephant-inspired souvenir items abound. “Elephant figures remind me of my dad,” she said. But not all her figurines are from Thailand. “I got some from local antique shops. The smallest in my collection cost me P2,000. I couldn’t resist it.”

She is obsessed with cameras. “I’ve had this Lomo for three years,” she volunteered, “but I haven’t figured out how to use it.” She has three fave cameras. “The big Polaroid from the 1980s is from my father. I also have the latest digital Polaroid, which lets the user choose which photos to print out. I have a Fuji Monoclassic Instamax that prints photos as small as business cards.” 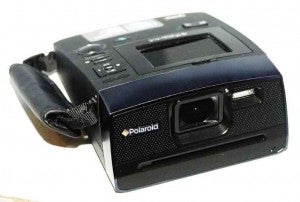 Her first digital camera is a tiny Canon that she bought for a recent beach outing. And three years ago, for her birthday, she bought a Sony video-cam that has its own projector. Taking pictures is important to her because she keeps journals. “I feel bad when I don’t have a memento of a milestone,” she said.

She calls her scrapbooking hobby “very 1990s.” She can be a hoarder: “I keep everything—plane and bus tickets, restaurant bills, candy wrappers…”

She collects color pens, pencils and highlighters. “Do people still use dermatographs?” she wondered. “When I am in a bookstore, I head straight to the pens and pencils section.”

She is drawn to notebooks with one-of-a-kind designs. “I got one in Baguio; the cover is handwoven and the pages are torn. It’s very beautiful.”

One she got in Singapore sports a nutty message on the cover: “I am not paranoid; everyone is just looking at me.”