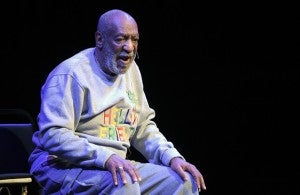 FILE – In this Nov. 21, 2014 file photo, comedian Bill Cosby performs during a show at the Maxwell C. King Center for the Performing Arts in Melbourne, Fla. The promoters of Bill Cosby’s three shows in Canada next week said Friday, Jan. 2, 2015, the comedian’s representatives informed them he has “every intent” to do them and they are legally obligated to put them on. AP

TORONTO – The promoters of Bill Cosby’s three shows in Canada next week said Friday the comedian’s representatives informed them he has “every intent” to do them and they are legally obligated to put them on.

Chicago-based Innovation Arts & Entertainment said in a statement they understand the decision is unpopular but that both they and the venues are obligated to proceed and that “we would face crippling legal obstacles for violation.”

More than 15 women have come forward since November claiming to have been drugged, sexually assaulted or both by Cosby, who has never been charged in connection with any of the allegations. As controversy has grown, Cosby’s scheduled Netflix concert special was canceled and NBC scrapped a new Cosby sitcom in development.

“As recently as this morning, IAE has been informed by Mr. Cosby’s representatives that he has every intent to perform these events,” the statement said.

Protests are planned for the Canadian shows. “While it is disappointing for the need to worry about the theater being a place for planned protests, we are fully prepared to protect our audience,” the statement by Innovation Arts & Entertainment said.

Megan Walker, executive director of the London Abused Women’s Centre, who is planning a protest outside the London venue, took issue with the promoter’s statement.

“There’s an implication that somehow a peaceful protest is going to become violent when the violence we’re concerned about is the violence that the women have alleged against Mr. Cosby,” Walker said.

Scott Warren, the general manager of Hamilton Place Theatre in Hamilton, Ontario, has said the theater is bound by a contract with the promoter and would risk being sued if the show were canceled.