Aquino to attend Dingdong-Marian wedding as ‘Witness of Honor’ 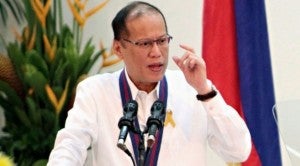 After gracing the commemoration of Rizal Day in Manila, Aquino will drop by the wedding to show his support for Rivera and Dantes, who is commissioner-at-large of the National Youth Commission.

The couple, especially Dantes, has been supporting Aquino, even when he was still running for president in 2010.

Aquino, who was listed in the invitation as the “Witness of Honor,” is expected to arrive at the Cathedral of the Immaculate Concepcion in Cubao, Quezon City at around 3 p.m.

His sister Kris Aquino and long-time supporter Ogie Alcasid are among the principal sponsors.

In September, Aquino confirmed to media that he was invited to the weddings of Dantes and Rivera and of Senator Francis Escudero and Heart Evangelista.

“They’ve been very supportive, both of them. And they really seem to be happy. So I really hope that it continues for the rest of their lives,” he said of Dantes and Rivera.

At that time, he said he was attending as a guest as opposed to Escudero’s wedding where he would be the best man.

Aquino said he was “relieved” that he was not asked to stand as a godfather since there is a Filipino belief that single people who become godparents in weddings are likely to remain single for the rest of their lives.

Read Next
How ‘The Interview’s’ VOD grosses could change the game
EDITORS' PICK
Smart celebrates all kinds of ‘#SimplyLove’ for Pride Month
Smart brings KCON:TACT especially 4U to subscribers from June 19 to 27
Lacson disputes need for more COVID-19 vaccine funds
How this dad raised an empowered trans daughter
Gilas out to prove Korea win not a fluke; Tab fires back at ‘lucky shot’ remark
Minor’s death in Laguna drug raid prompts probe; 10 cops held
MOST READ
Underdog Dasmariñas vows to fight to the death vs Inoue
The opposition’s dilemma
Rajko Toroman praises, warns Gilas Pilipinas
How this dad raised an empowered trans daughter
Follow @KSabilloINQ on Twitter
Don't miss out on the latest news and information.