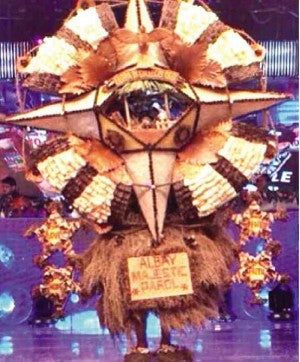 Each Yuletide season, many small communities and barangays hold Christmas tree and/or parol competitions, stressing the use of “native” materials at minimal cost, and group creativity and neighborhood or community involvement.

While most everyone should get “E for Eeefort,” the results are often less than truly aesthetic, because the “native” or natural materials used are generally brown in color, which simply isn’t very festive.

And, when colorful plastic or other artificial materials are added to solve that problem, the solution sometimes results in a similarly unsalubrious mix. —What to do?

For some weeks now, on “It’s Showtime,” some solutions have been provided by way of the noontime show’s “TV Parol” competition, which featured native Christmas lanterns big enough to each contain a person within.

The “walking parol” tilt came up with a number of fascinating finalists that competed for the top prize last Saturday, Dec. 20—and we made sure to watch the finals, because some of the “best of the best” contenders were truly choice.

It was amazing to see how the most “ordinary” and inexpensive materials could be transformed by inventive design and execution into veritable works of high craft—and sometimes even of art.

True, the parols made out of brown leaves and grasses still looked comparatively dark and un-festive, but the big learning point for us was that other cheap materials could be judiciously combined to produce works of real beauty and excitement!

Specifically, we learned that colored soft drink bottles, if creatively cut up and combined, could end up looking so bright, lovely and celebratory!

In particular, the generally light-green hues of the finalist entry from Bacolod, with its “Masskara” motif, was a standout in this regard, as was the giant parol made out of 6,000 plastic spoons—and then some!

Also deserving of special mention for interesting and sometimes even witty design were the Christmas lanterns featuring simple “machinery,” like a “wheel” of spinning rays, and a bird made out of dried leaves, with flapping wings.

It was also impressive that the huge parols cost only a thousand pesos or a little more, since they were made out of “found” or donated materials.

But, when the winners were finally announced, admiration turned to consternation. Third place winner, “Dahon I Want For Christmas,” lacked sparkle, and the top victor was similarly dark—although it did feature a charming belen.

Our personal choice was the Masskara parol, mainly for its festive colors, but it managed to win only second place.

Despite this less than thrilling outcome, “TV Parol” was a fun, creative tilt that should be held again next December, hopefully with brighter and more appropriately festive contenders!