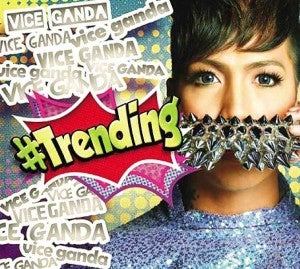 Vice Ganda may not have the wide vocal range of some of our best performers, but at least he knows how to mask his limitations with his interpretive ability, clear baritone and accessible vibrato—as his latest album, “#Trending,” proves. —And, it doesn’t hurt that it’s hard to find fault with his ability to entertain his audience.

His hit album contains catchy novelty tunes (the self-penned “Boom Panes”) and anthemic ballads (Jimmy Antiporda’s “Malaya Ka Na”)—a collection that is made heftier by remixes and minus ones.

“Push Mo ‘Yan, ‘Te” is as rousingly inspiring as it is wacky—but, it is instantly noteworthy because of the judiciously rendered improvisational runs of the prodigious Regine Velasquez in the background. Asia’s Songbird impresses, even without stealing Vice’s musical thunder!

Vice doesn’t rest on his wacky laurels. The multimedia star cashes in on his album’s irreverent tone and brutal honesty by singing songs, like “Aba, Matindi,” about corrupt government officials who remain shamelessly remorseless, even in the wake of incriminating exposes about their greed and nefarious practices.

In “Ibang Hugis, Ibang Kulay,” cowritten with the prolific Noel Cabangon, Vice sings not only about gender inequality, but also about the divisive differences that lead to hate and discrimination.

Curiously, Lani Misalucha is billed as a featured artist in the otherwise earnestly (and tellingly) rendered ballad, “Malaya Ka Na,” even if she’s nowhere to be found in the track! 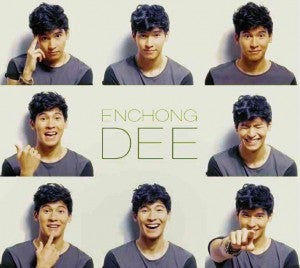 Dee. His album is a triumph of technology more than a testament of his singing ability.

For his part, Enchong Dee can’t sing to save his life—but, let’s get this straight, his self-titled debut album is a triumph of technology more than a testament of his singing ability.

For the most part, the compilation banks on the innovative skills of the creative minds behind it, in this case arranger RB “Kidwolf” Barbaso.

Dee turns wishful thinking into musical reality—and the result is a repertoire of expendable jingles (“Seloso,” the self-penned “Isip o Puso”) that rely on Barbaso’s sizzling arrangements, most impressively in the enthusiastic reworking of VST & Co.’s “Step No, Step Yes.”

“Chinito Problems” introduces an innovative treat by mashing up Jed Dumawal’s melodically appealing hooks with a sampling of the jaunty hit single, “Chinito,” spruced up with Yeng Constantino’s gorgeously amped up and high-pitched vocals!