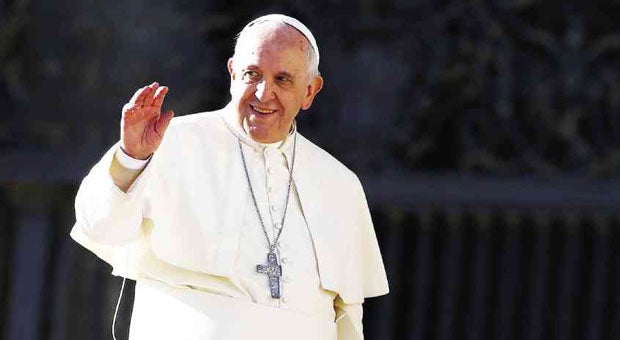 For 20 years now, writer-director Nestor Torre has been credited with enhancing the country’s artistic and spiritual life with religious plays and musicals that have been embraced by audiences all over the Philippines.

He began writing and directing religious productions with “Magnificat,” starring Pinky Marquez and Dulce, about the Virgin Mary’s life, with music by Ryan Cayabyab.

The religious work has been so acclaimed and popular that it’s been performed on tour all over the country, for 170 times—an unprecedented feat in Filipino spiritual theater.

This January, Torre is adding another title to his spiritual works—“With Love, Pope Francis,” to be initially performed from Jan. 15 to 19 at the Mabuhay Restop theater café at Rizal Park (near the Quirino grandstand), and later in Tacloban.

As producer Rose Cabrera describes it, “With Love, Pope Francis” is about the much-loved pontiff’s visit to Tacloban. Aside from telling the Yolanda survivors’ stories, it goes into Pope Francis’ life, to discover what has made him so uniquely loving, caring and charismatic.

These two main thrusts are dramatically and musically woven together by a gifted cast of some of the best actor-singers in the country.

Torre and Cabrera went to Tacloban to talk to disaster victims and better understand their challenging experience. Insightful research was also done on the Pope’s life, slides and videos on which will be significantly featured in “With Love, Pope Francis.”

The production is unique because it will make its debut at Rizal Park from Jan. 15 to 19 early next year, where millions of devotees are expected to gather for Pope Francis’ Mass, which is scheduled on Jan. 18. Since all those devotees will be spending many hours and even days waiting for that signal event, “With Love, Pope Francis” will have multiple performances each day from Jan. 15 to 19.

While waiting for the papal mass, early birds who have come to Rizal Park to get choice places days or hours before the important event will be able to watch the play and thus prepare themselves significantly for their once-in-a-lifetime encounter with one of the most well-loved pontiffs in history.

Torre’s spiritual works are known for not being “estampita” or predictably “pious” dramas and musicals. Instead, they are believable, peopled by flesh-and-blood characters with very human conflicts, and therefore easy for viewers to relate to and empathize with.

If your parish or school delegation wants to experience “With Love, Pope Francis” as a group, call Mara Salvacion at 0917 810-8194 or (02) 353-8752, or visit www.mabuhayrestops.com for details. Individual admission is also available for any of the show’s multiple performances from Jan. 15 to 19.