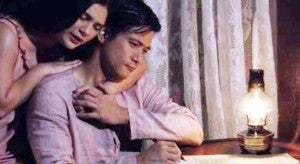 A Robin Padilla film is sparking a fresh wave of public interest in a long-standing historical debate on who is the first Philippine president, Gen. Emilio Aguinaldo or Supremo Andres Bonifacio.

Transportation and Communication Secretary Joseph Emilio Aguinaldo Abaya, a direct descendant of Aguinaldo, said that the question on who the first Philippine president was has already been answered.

“It has been settled and I think we have had the same history classes. If there are new discoveries of documents then history experts may or may not revisit,” said Abaya.

Abaya, however, refused to be dragged into a debate to defend Aguinaldo’s rightful claim to the title. “That is for expert historians to debate. The debate between people who are not expert historians is useless. I am one of those who is useless in this debate,” said Abaya.

“I am a mathematician, electrical engineer, lawyer and a retired member of the Philippine Navy. I am not a historian. Based on what I learned from grade school, Andres Bonifacio is the Supremo of Katipunan. So probably, he is the first president of Katipunan,” Abaya said.

But Abaya urged all Filipinos to watch the Metro Manila Film Festival (MMFF) movie entry to learn about the bravery of the local hero.

“I’m sure we will learn from the movie,” said Abaya, who was also a blood kin of Isabelo Abaya, a revolutionary hero from Candon, Ilocos Sur.

Abaya said that he, his family and three children would use the free tickets given by Metro Manila Development Authority (MMDA) chair Francis Tolentino to watch the film. The MMDA is the organizer of the annual MMFF.

Padilla’s film was originally titled, “Bonifacio, Gusto Mo Ba Siyang Makilala? (Do You Want to Know Him)” when it was announced among the eight finalists by the MMDA last June. When it was finally shown in theaters, its movie posters carried the revised title, “Bonifacio: Ang Unang Pangulo (The First President).”

When asked to comment on the movie’s title, Abaya noted that “provocation facilitates ticket sales.”

“These circumstances undoubtedly show that General Aguinaldo is the first president of the country. It is worth mentioning that the Philippines became independent as a result of a revolution.”

The heated rivalry on who is the first Philippine president is as fierce as the long-time discourse on who is deserving to be hailed as the country’s national hero, Bonifacio or Jose Rizal.

Bayan Muna Rep. Neri Colmenares said his group was hopeful that Bonifacio would gain his rightful place in the country history when it filed separate bills last year, during Bonifacio’s 150th birth anniversary, to declare him not only as the national hero but also recognize him as the first Philippine president.

“We want to correct this mistake of history. In fact, scholars have already agreed on this historical fact since the 1990s and it is only now that it is being discussed or known to the public. We are glad Robin Padilla made the film to honor the man who led the movement that eventually overthrew Spanish tyranny and corrected the distortion in our history,” said Colmenares.

Colmenares urged the House leadership to fast track the hearing of the Bonifacio resolution so that it would take effect as a law.

Caloocan Rep. Edgar Erice also filed a resolution to convert the Bonifacio monument in Caloocan City as a historical shrine and museum or the same status as the Rizal monument at Luneta Park.

“Both Andres Bonifacio and Emilio Aguinaldo declared themselves presidents of the republic. It’s not for us to tell,” said Erice. “What is important is to declare both Rizal and Bonifacio as our national heroes worthy of emulation by the Filipino people.”

A year ago, the Manila City Council approved a resolution to recognize Bonifacio as the country’s first president, citing recent findings and new evidence uncovered by historians to boost this claim.

Early this month, Caloocan Mayor Oscar Malapitan said his city should be considered the first capital of the Republic of the Philippines since Bonifacio crafted his plans and strategy against Spain in Caloocan.