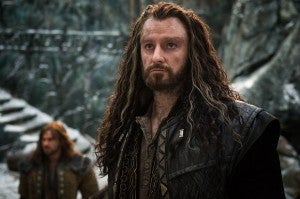 In this image released by Warner Bros. Pictures, Richard Armitage appears in a scene from “The Hobbit The Battle of the Five Armies.” AP

The last of six films adapted from J.R.R. Tolkien’s books by Oscar-winning director Peter Jackson, “The Hobbit: The Battle of the Five Armies” took $54.7 million on its debut weekend in the United States and Canada, according to box office tracker Exhibitor Relations.

The success of “The Hobbit” flattened the competition in the final weekend before the Christmas holiday period.

Second spot went to “Night at the Museum: Secret of the Tomb,” the third film in the Ben Stiller family comedy franchise based on the popular 1993 children’s book.

The movie, which sees Stiller reprise his role as the security guard trying to keep a track on exhibits which come to life at the New York Museum of Natural History, took $17.1 million.

In third place was another debutant, “Annie,” the rebooted big-screen adaptation of the famous Broadway musical about the adventures of an orphan girl which also spawned film versions in 1982 and 1999.

The latest version, starring Quvenzhane Wallis in the title role and Jamie Foxx as the tycoon who takes her under his wing, took $15.9 million.

Another sequel, “Hunger Games: Mockingjay,” slipped to fifth with $7.9 million, pushing its earnings to $289.2 million after five weeks.

The film, which has vaulted Witherspoon into contention for best actress honors in Hollywood’s awards season, took $4.1 million.

In eighth place was Chris Rock’s “Top Five” about a comedian trying to become a serious actor while grappling with his reality TV star fiancee about broadcasting their wedding. The film took $3.6 million on its second weekend.

New entrant “P.K.,” an Indian comedy from Bollywood star Aamir Khan, was in ninth with $3.57 million.

Rounding out the top 10 with $3.5 million was “Penguins of Madagascar.”