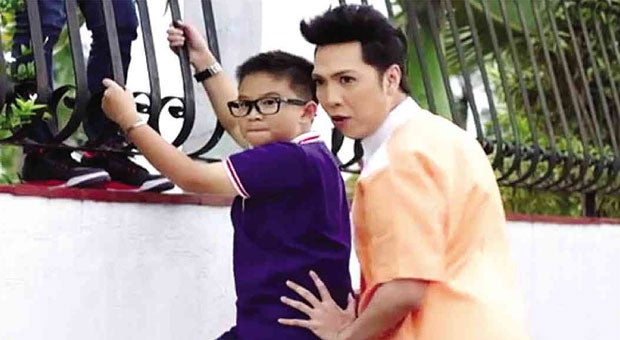 “She often meddled,” quipped comedian-TV host Vice Ganda about Kris Aquino who, he said, frequently visited the set of the movie “The Amazing Praybeyt Benjamin” to check on her son James “Bimby” Yap Jr.

Bimby is in the cast of the action-comedy film, which Kris is co-producing.

Vice Ganda said members of the production team were always on their toes when Kris was around. “She would keep looking at her watch and tell us to work fast. She always brought food. She knows that we all care for Bimby. She is happy when people on the set treat him like a normal kid and not like the nephew of the President.”

The comedian noted that this is the second year that he and Kris are competing in the box-office race of the annual Metro Manila Film Festival. Last year, he played the lead in Wenn V. Deramas’ comedy “Girl Boy Bakla Tomboy” while Kris coproduced Tony Reyes’ “My Little Bossing,” which also featured Bimby. Vice and Kris worked together in the 2012 comedy “Sisterakas.”

Vice admitted that the rivalry strained their friendship. “We didn’t really fight—nagkaartehan lang ng konti. I didn’t take that seriously, though,” he said. “I don’t want to think of box office results for this year’s festival. I refuse to feel pressured. I’m just happy that I’m working with Bimby, and with Kris as producer, on this project.”

He is also working with hunks Tom Rodriguez and Richard Yap on this sequel.

He said of the “Be Careful With My Heart” star: “Richard is a normal guy with a really interesting personality. Believe it or not, he’s capable of cracking green jokes and naughty comments. He’s like any other guy. He actually made us laugh with his performance.”

This movie is his fifth teamup with director Wenn V. Deramas. “I care so much for Direk Wenn. He is the first director who trusted me enough to give me a movie project (‘Petrang Kabayo’ in 2010). He really took care of me,” Vice told the Inquirer. “What we have is a special relationship. I know I am capable of giving my best if I have Direk Wenn as my director.”

For Vice, the sequel is a lot more challenging because, he said, “The original version was very successful. We had to work doubly hard on this to surpass the accomplishment of the first. My aim is to make P600 million with this one.”

He added, “Aside from that, the sequel is more physically exhausting, with all the stunts and choreographed fights that I had to do with Tom. We had to hire fight instructors for this.”

Looking back, Vice said 2014 was a great year for him. “I won awards this year. When I first joined show biz, I didn’t really aspire for awards. I just wanted to enjoy being a performer and, at the same time, earn from it to help my loved ones. I’m grateful for all these blessings.”

“The Amazing Praybeyt Benjamin” is an official entry in the 2014 MMFF, which starts on Christmas Day. It also features Alex Gonzaga, Nikki Valdez, Kean Cipriano and Al Tantay, among others. ([email protected])