When you’re good to Mama, you razzle-dazzle ’em 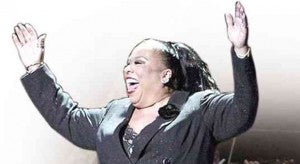 The musical “Chicago’s” Matron Mama Morton—Keeper of the Keys, Countess of the Clink, Mistress of Murderers Row—in the current Manila run would “loooove to play Billy Flynn, the law-yah—with an ‘ie.’”

Roz Ryan, Broadway veteran, has a favorite number in the two-and-a-half-hour show (including intermission), and it’s not performed by her plucky Mama. “Billy Flynn’s ‘Razzle Dazzle,’ that’s the one I’d like to do, for what it says—that with enough glitter and lights, camera, action, you’re gonna be a star.”

As “Chicago” fans around the world know by now, that is first-class sarcasm cloaked in a catchy tempo and deceptively simple lyrics. That’s certainly not how it happened to Ryan, whose Mama is the result of 15 years of playing the character on Broadway and around the world.

In October, she broke a longtime company record with the most performances by a leading actress—224 weeks—in the Tony-winning revival’s 17-year run.

She just might get to realize her Billie Flynn fantasy. “An all-female version is being planned,” she told the Philippine Daily Inquirer during a post-premiere interview in New Orleans at the start of this current world tour. “That’s where I wanna go,” she cracked, “because (from another song in the show) all I care about is love.”

Speaking of longevity, “Chicago” is the longest-running American musical on Broadway and it is in Manila until Sunday, December 21, playing to enthusiastic audiences at The Theatre, the spanking new lyric theater at Solaire Resort and Casino. Every night, since December 3, Ryan has been engaging audience members in the front row with her little banter.

“Super hit, no miss,” promoter Bambi Verzo of Concertus Manila reported. This, in reference to the reaction of guys, usually, on whom Ryan trains the spotlight for about 30 seconds at any point in her solo spot, “When You’re Good to Mama.”

“You like that, don’t you, baby?” she would ask him, or her (“I don’t discriminate”). What happens then varies from continent to continent, but only slightly.

“They usually love it,” she said, chuckling. “Ninety percent of the time I am accurate [with my choice]; sometimes, I miss. I’ve found some totally asleep … in the first row! And I’ve had to say, ‘Honey, I’m up here.’”

The ad libs are all hers. “I’m a night club singer; I interact with my audience,” Ryan pointed out. “(Director) Walter Bobbie said I should keep it [in my act].”

A funny aside: “Sometimes, outside of the theater after the show, some folks come up to me and say, ‘Hey, you were talking to me, remember? I’m in the fourth row.’ I just say, ‘Yaaaaah?’ Heck, I can’t see that far from the stage!”

She decided to favor the Inquirer with a “secret”—how she picks ’em: “I peek from behind the curtain, watch the people’s reaction to ‘Cell Block Tango.’ Usually, I can tell, just doing that, which ones I should go for. I’ve been terribly wrong a few times. They were gone after intermission; they didn’t like being put on the spot.”

Ryan is an animated interviewee, punctuating words with uninhibited glee and crackling laughter. “I like my Mama smooth and sexy,” she said, explaining her departure from the usual portrayal of the bribe-taking jail matron as intimidating and hard. “Walter Bobbie said it makes sense for Mama to be … even caring, because that would explain why all those women in jail are happy to give everything to her—money, cigarettes, jewelry …”

Even critics have always felt free to say anything about her. She’s been described as “scene-stealing.”

“I have no problem with that,” she guffawed. “Reviews don’t scare me because critics are very likely seeing something that I don’t. I am willing to learn from what anyone has to say that is valid. When I did ‘Dreamgirls,’ one review said I was a better actress than a singer. I found that very flattering, because I’ve been a singer all my life!”

Alongside singing and acting, she has two other loves—New York and touring. “I live in LA (Los Angeles, California) but I must have some New York during the year.” And when she hears “international tour,” her involuntary response is, “My hand shoots up! When I learned I was coming to Manila, I was 2 feet off the ground. I want to go everywhere—experience new countries, new people, new dishes. It’s the biggest benefit of being who we (actors) are and what we do.

“Even in countries where, owing to language barrier, they don’t get the jokes,” Ryan said, “at the end of each show, they’re on their feet, screaming, because they do get the music.”

Having said that, she validates the perennial observation that the musical’s real stars are the book and the lyrics, which have been widely critiqued as “wickedly clever.”

“I do—agree—with that, 100 percent,” she said. “The words are filled with nuances and double entendres … you have to listen four, five times to get it. That’s why we’re still doing this musical. Come on, Fred Ebb (lyrics) and John Kander (music)? We’re very fortunate!”

Still, asked what is the most scrumptious line she’s ever had to deliver in “Chicago,” she shot back, not thinking twice, “You like that don’t you, baby?”

Seriously: “It has to be ‘When you’re good to Mama, Mama’s good to you.’ That says it all—if you take care of me, I got you.”

She called attention to another crowd pleaser, “Class,” which Mama performs with Velma Kelly (played in Manila by Terra C. MacLeod). “That’s not a classy song at all. We’re saying nobody’s got none … don’t even say oops (“when they’re passing their gas”) … sonofa … but it’s the way that we’re singing it … it’s almost melodically operatic. There’s your ‘wickedly clever.’”

Ryan has been doing television and movie work as well—and then there’s the nightclub singing. She’s kept them all separate. She doesn’t even do Broadway songs in the clubs, or in the shower. “Offstage, I sing Sarah Vaughn and Carmen McRae.”

The stage keeps her wired, she said, because of its unique challenges. “I love the instant gratification,” she said. “The audience is right there and you get only one chance. Once the words are out of your mouth, well, they’re out there. You cannot reverse it. If you make a mistake, you cannot stop. You just carry on. It’s like a hiccup.”

She has seen the 2002 movie version by Rob Marshall. “I liked it, I did,” she said. “I loved Richard Gere (as Flynn) and Catherine Zeta-Jones (as Velma). That woman danced within an inch of her life.”

“Class” was famously omitted in the film. Ryan was happy about that, she said, “because when people come to see the show on stage, it’s something new. But if I were in the movie, I wouldn’t have been glad.”

She understood that the producers had to put “a Hollywood spin on it,” thus the casting of Queen Latifah as Mama. “She was just too young [for the role], I felt,” Ryan said. “So I liked the movie. I just think I should have played Mama.”