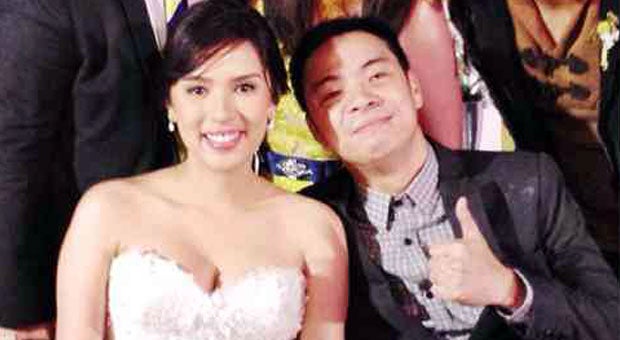 Neri Naig and Chito Miranda’s garden wedding had a picnic feel to it. Photo courtesy of Kathleen Dy-Go

After two years of being in a relationship, music artist Chito Miranda and actress Neri Naig have finally tied the knot—in two separate ceremonies, no less—over the weekend.

The couple exchanged vows in civil rites on Saturday in a restaurant in Taguig City, before proceeding with a garden wedding in Silang, Cavite, on Sunday. “Sa wakas … mag-asawa na kami!” Miranda, frontman of the rock band Parokya ni Edgar, said in one of his posts on Instagram.

During their second wedding ceremony, Miranda wore a black suit, while Naig walked down the aisle in a strapless, Veejay Floresca gown, as the song “Pure Imagination” played in the background.

According to one of the guests, actress Liza Diño—who herself got recently married, to Aiza Seguerra in the United States—the ceremony was laidback and had a casual, picnic-like atmosphere. “Chito and Neri were so happy,” she told the Inquirer. “It rained during their exchange of vows, but I think that’s a blessing.”

The event was attended by some of Miranda and Naig’s friends from in and out of show biz. Among those spotted were Angel Locsin, Paolo Paraiso, Bela Padilla, Xyriel Manabat, Jay Contreras of Kamikazee and Ramon Bautista, who reportedly officiated the wedding.

Miranda and Naig, who got engaged in May this year, became the subject of controversy last year, when the couple’s private videos were leaked online. They have since weathered the storm with unwavering resolve; as the Parokya vocalist would always say back then, “’Di niyo kami matitinag.”