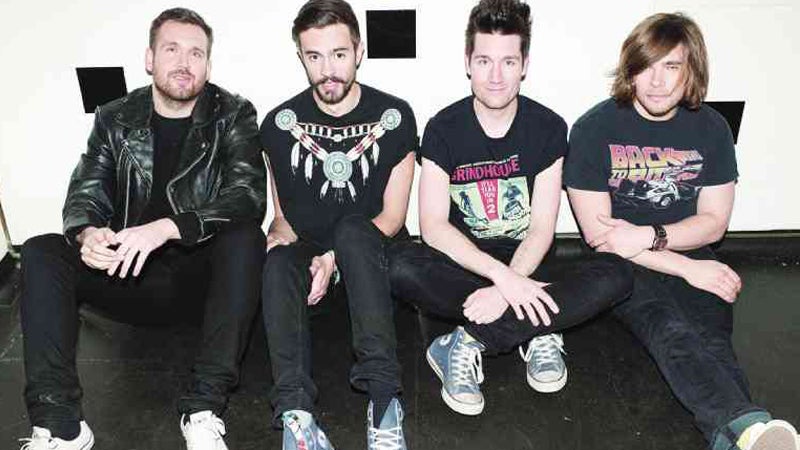 The past two years have been quite a ride for new British band Bastille, whose infectious, electronic synth-laden tunes are steadily gaining traction in the international music scene. For instance, Bastille’s hit song “Pompeii,” lead-off track of its first studio album, “Bad Blood,” was a Top 10 single in more than 10 countries, including the United States.

The four-man group—composed of Dan Smith (lead vocals), Chris Wood (drums), William Farquarson (guitar) and Kyle Simmons (keyboards)—was named best breakthrough act at this year’s Brit Awards, and has started to book high-profile gigs such as playing at the Glastonbury Festival and securing a spot in “Saturday Night Live.”

Early this month, Bastille earned a best new artist nomination for the 2015 Grammy Awards, which solidified its status as a band to watch for. In a phone interview just a day before the nominees were announced, the Inquirer asked Bastille drummer Chris Wood about his thoughts on winning awards, and if he and his bandmates are pressured by the expectations that come with the trophies.

“That could’ve been the case… But no one’s putting pressure on us,” Wood said. “The only pressure we have to deal with is the kind we put upon ourselves; we want to continue making good albums and good music. We try to treat each song like it’s a would-be single.”

Interestingly, one of the acts that Bastille will be competing against in next year’s Grammys is the all-girl band Haim, one of the featured acts in the former’s third mixtape album, “VS (Other People’s Heartache, Pt. III),” which is distributed locally by MCA Music Philippines. “We worked with many good artists, some of whom are our friends,” Wood said.

As part of its Asian tour, Bastille—through show promoter Karpos Multimedia—will headline a one-night Manila concert on Jan. 5, 2015, at the World Trade Center in Pasay City. (For tickets, call SM Tickets at 4702222; or visit www.facebook.com/karposmultimedia for info.)

Excerpts from the Inquirer’s interview with Chris:

What are you looking forward to in this Asian tour?

Aside from the Philippines, we’re also going to Malaysia, Singapore and Hong Kong. We hope to [taste] new food, see new places and do new things.

Do you enjoy doing live shows better than being in the studio?

I like doing both, really. I love playing for a great crowd and feeding off the energy they give you. I will never get tired of playing “Pompeii,” for the fans. But being in the studio is great, too, because you get to play around and keep things fresh. I also get to practice more.

What are your thoughts on the success of “Pompeii”?

At first, I thought we were doing just okay. And then suddenly we’re hearing it on the radio, it got a lot of buzz, and then it just kind of took off. That song has taken us to so many places.

You guys are still relatively new in the business, but what has been the highlight so far?

Playing and winning an award at the Brits 2014 was pretty special. It was something we just watched; we never imagined that we would actually be there. Being a supporting act for the band Muse’s tour and playing at the Glastonbury Festival were also very memorable.

I’ve read that Bono of U2 asked to have a photo with you guys during the recording of Band Aid 30.

Yeah, he’s really humble and genuine. I’m blown away by the whole experience!

What sort of things inspire you to create music?

Dan is obviously the songwriter in the band. But yeah, we get inspired by the simplest things like a conversation, seeing new places, having new experiences, and meeting new artists. We sort of take these all in, and see where it leads us.

The band is labeled as an indie rock or electronic-pop band. How would you describe it yourself?

I guess “cinematic indie pop” kind of works? But still, we don’t want to limit ourselves to a specific label, because we cover a lot of bases—some songs have a cinematic feel, some are heavy on electronic sounds, while some are very minimal.

You have a new mixtape titled VS. (Other People’s Heartache, Pt. III).

It’s a mix of covers, samples; a series of collaboration with artists like Skunk Anansie, Haim and Angela Haze.

What are your considerations in choosing artists to collaborate with?

We try to work with different artists with unique sounds. If we work with, say, another pop-rock band it would sound samey. We try to cover different types of music.

What sort of direction do you see the band going into in the future?

Perhaps it would be heavier and will have more electronic sounds. But for sure, we will be experimenting, try to push things further and see where it takes us.