Angelina on having a happy family life

LOS ANGELES, United States—In our first interview with Angelina Jolie since she got married to some guy named Brad Pitt, she wore a white dress, looking every inch like a modern bride. Make that a modern, accomplished woman. Angelina’s “Unbroken” is quite an achievement, especially since it’s only her second directing job. “It does feel differently when you say, ‘My husband,’” said Angelina about being able to call Brad that. “It warms you in a different way and you look at that person a little differently.” 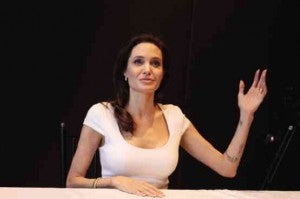 She and Brad are able “to explore the darker side of marriage” in their new film because, she says, “We’re in such a good place.” RUBEN V. NEPALES

Seated in a meeting room at the Mandarin Oriental Hotel in New York, Angelina looked radiant as she answered questions with her usual disarming candor. This woman is always engaging.

On the wedding of the year that was held last August, the actress-director said, “What was lovely about it was that we didn’t feel the need to get married as if there was something missing. We felt so complete and our family felt so complete. The commitment to children is one that you cannot divorce from or walk away from. We already had that commitment. We wanted to recommit in a deeper way… and celebrate with our children this union that we had formed.”

Complimented about her six kids’ drawings on her wedding veil and train, Angelina beamed as she replied, “It was my idea. Over the years, Brad and I always get our kids to draw things and we make T-shirts or notebook covers. Or he’s made jewelry for me out of their drawings. We often use their drawings.

“They were going to put their stamp on the wedding dress. One wrote ‘Buttock Futtock’ (laughs)… we still don’t know what that means but it is on the dress. So there are a few really odd ones. Each [child] did a few [drawings].”

Angelina said making the gown didn’t take very long. “We talked to Versace but we’d been almost getting married for years. So we had this discussion a while ago that when I did it, we already had the idea of the shape, what it was going to be and how we would embroider it.

“But then when we pulled the trigger, we had about two weeks and so yeah, not long. They had extraordinary people working on the embroidery. But it was also a fun project because it felt like a bunch of artists all getting together. We had each drawing in four different sizes to try to stick, tape and to try to make patterns from. It was fun.”

Asked how often she attends weddings, Angelina laughed as she answered. “I am not often invited to weddings. Maybe there are a few people who think I don’t like them. I suppose I’ve been to my own, though (laughs). A few hours after, as soon as [the wedding] was over, we all just changed clothes and hung out. Pax had made the cake. It was a very happy time.

“It wasn’t this monumental change. We didn’t do anything special. We were just very happy and sure. That’s quite an extraordinary feeling—to be so sure. It gives you peace. You have moments like that in your life, you do. I didn’t work during that time. I actually sat and enjoyed that time.” 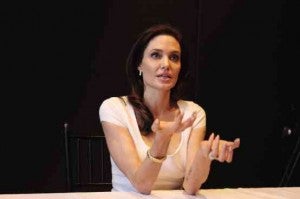 For their honeymoon, the couple went straight to work in Malta on “By the Sea,” their first film together since “Mr. & Mrs. Smith.” Angelina directs again, this time tackling her own script. In the romance/drama set in the 1970s, Brad and Angelina play a married couple who are growing apart. “We’re in such a good place that we’re able to explore the darker side of marriage,” she explained. “As artists, we wanted to be able to play. The story has depth. It’s a bit crazy, a bit of fun.”

On directing Brad for the first time and herself, Angelina quipped, “He’s much easier than she is. He’s actually wonderful to work with. He’s such a great actor. It’s the first time I’ve worked with actors who have had experience and long careers—Niels Arestrup and many of these people.

“Most of the films I’d done are with relatively new casts so it was very interesting. It sounds crazy to work with your husband but, in truth, there’s nobody that I trust more. We really just want to help each other. I wanted to do my best to support him… We were able to give each other enough. But I really didn’t love directing myself. It’s not a fun thing to do (laughs).”

The prolific talent claimed that she wrote the screenplay while the kids were in their art classes and other activities. “I wrote that one a few years ago. It was a downtime… I was probably sitting outside waiting for my kids while they were in an art class. It was one that I wrote for fun and I wrote with Brad in mind and myself. I wrote it before I became a director. I never assumed that I could be a writer or director so it was just a fun thing.

“We sat on it for many years, always saying that one would be the craziest thing to do, that we shouldn’t do that, that’s too much. So of course, we got married and thought that’s the perfect time. We’ll do something together and we’ll do something bold.” 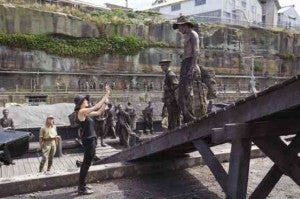 Actress as director on the set of “Unbroken.” Angelina Jolie works with relatively new actors in this WWII drama . DAVID JAMES

“So it’s this small group of people and how they relate to each other. In the center of it is this couple who comes into town. They are having a really bad time with their marriage. Through the film, you realize why.” She added that a couple of characters have her maternal grandparents’ names— the Bertrands.

Complimented about being able to juggle all of her various passions, even snagging an honorary Dame title from the Queen along the way, Angelina said, “It sounds more impressive than it is. I have the great fortune of having a great husband who’s very supportive. I have a job that I love. We are able to take turns [working] other than in ‘Unbroken’ and ‘Fury,’ which we did at the same time. It wasn’t easy but we’re usually able to take turns. We have the financial ability to bring our children around the world with us and educate them in the middle of Malta or England and wherever we may be.

“I have an exceptional support team and a lot of good fortune. I’m not in any way exceptional. I’m just very good at scheduling (laughs). I’m a maniac for scheduling. That’s something every parent knows how to do.”

(To be concluded Sunday)

Brad Pitt, life after the wedding