‘Shrek’ the halls for the holidays 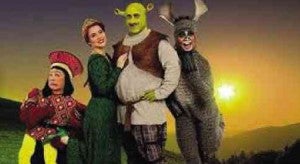 The cast of “Shrek the Musical”

All good things are worth repeating. So it’s time to “Shrek” the halls again, as everyone’s favorite green ogre returns onstage in time for the holidays.

“Shrek the Musical” stomps back to

town for a limited engagement, Dec. 26 to

The musical, which includes “I’m a Believer” in its score, recently had an acclaimed sell-out run in Manila.

The cast is led by Rycharde Everley as Shrek, Shiela Valderama-Martinez as Fiona, Nyoy Volante as Donkey, Lorenz Martinez as Lord Farquaad, Nel Gomez as Pinocchio and Carla Guevara-Laforteza as the Dragon. It’s directed by Bobby Garcia.

Here’s my one-on-one with Bobby:

What are your do’s and don’ts at work?

I expect everyone to come on time. And that they have done their homework, learned their lines, music and choreography … that they are ready to have a great day of exploration and discovery.

Tell us about “Shrek the Musical.”

It is a wonderful stage version of the DreamWorks animated film and the William Steig book. It is a fun-filled show that the entire family can enjoy.

What do you love most about Shrek’s story?

I love its humor and I think Jeanine Tesori has created some wonderful songs. “Shrek” has a wonderful message: That we should celebrate differences and not conform to society’s expectations.

I wouldn’t say one is more disciplined than the other. The requirements are different. In film, you need the skill to perform a role out of sequence because most of the time the shot list is dictated by a location’s availability.

In theater, you rehearse and perform in sequence … but you need the skill to keep it fresh and real. In theater, we expect everyone to come on time, as we start on time. There is a greater commitment to time.

What is the state of Philippine theater?

I am one of those who believe that Philippine theater is growing. We have more theaters opening and more productions being mounted. Even foreign productions that come in are great for the industry, as a whole. It shows that theater is a viable industry. We still have to work on developing a bigger audience.

What’s your vision for Philippine theater?

For the country to become Asia’s theater capital. With our talents, we should market our shows regionally, not just locally.

Who are the easiest actors to work with?

The ones who come prepared, who take their work seriously and come each day with a desire to get better. The work we do is hard. There are no shortcuts.

What’s your advice to aspiring actors?

Read as many plays as possible. Read on the history of your craft. Know who came before you and what they did. Work on your voice, diction and comprehension of script. Find out what makes you unique as an actor and celebrate that uniqueness.

If your life would be made into a play, what would be its title?

“Sunday in the Park with George.” It’s one of the most complex, beautiful musicals about the creation of art and what we leave behind.

To mark its second anniversary, Jeepney TV held a concert in honor of the 1980s musical program “Ryan Ryan Musikahan” at Rockwell Tent.

In my Monday column, I meant StarMobile, not Smartmobile.