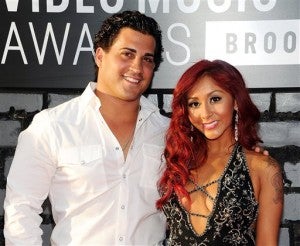 The Record newspaper reports that among the guests were “Jersey Shore” castmates Sammi Giancola. Deena Cortese and Jenni Farley. Polizzi currently stars with Farley in MTV’s “Snooki and JWOWW.”

A few dozen onlookers waited outside the church.

Seventeen groomsmen and 15 bridesmaids attended the ceremony, which had a “Great Gatsby” theme.

Polizzi and LaValle have two children, ages 2 and 2 months.